Home > Celebs
When you buy through our links, we may earn an affiliate commission. As an Amazon Associate we earn from qualifying purchases. Learn more.

What really happened? That’s the question that surrounded the death of Star Wars star Carrie Fisher. On May 4th, the day when so many people say “May the 4th be with you,” Dr Oz wanted to take a look back Carrie’s final moments and determine whether she could have been saved.

Dr Oz: A Look Back At Carrie Fisher’s Last Moments 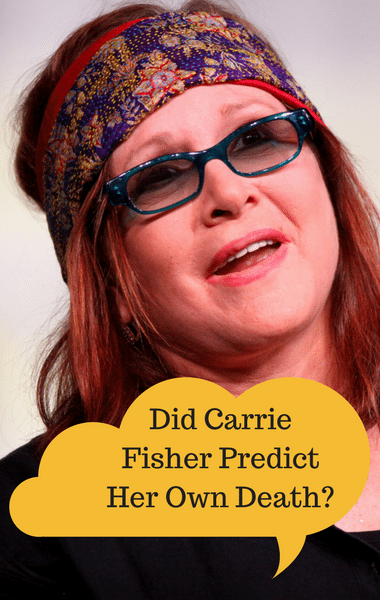 Carrie Fisher may have predicted her own death to her good friend James Blunt. Michael Yo and Dr Oz discussed the eerie details of her death. (gageskidmore / Flickr)

First, reporter Michael Yo took us back to Friday December 23, 2016. At 9:27 AM at the London Heathrow Airport, Carrie had just finished filming for the Amazon series Catastrophe and was heading home to Los Angeles on United Airlines flight 935. It was an eleven hour trip and a few minutes before landing, Carrie Fisher went into cardiac arrest.

Several crew members and passengers, including a doctor and nurses, jumped into action and administered CPR. A pilot radioed ahead before landing. At 12:25 PM at Los Angeles International Airport, the flight touched down. There’s no doubt it was a terrifying situation given the lack of resources and space when trying to resuscitate Fisher.

For the paramedics showing up, they had to get Fisher off the plane and rushed to UCLA Medical Center eleven miles away. During that time, Fisher was assessed to try to figure out what treatment to use. It turns out that UCLA wasn’t the closest hospital, but typically cardiac arrest patients are taken to the nearest hospital. It’s possible that something in her condition changed, making UCLA the more appropriate place to take her. Once at the medical center, Fisher was placed on a ventilator in the ICU.

Fisher’s brother reported that his sister’s condition was unknown, stating “There’s no good news or bad news.” On December 27, 2016 at 8:55 AM, Carrie Fisher passed away.

It’s not too surprising that people still want to know more about the passing of Carrie Fisher, given that she was co-lead of one of the biggest movie franchises in history. A lot of fans felt hopeful when Carrie made it from the flight to the hospital, which made it more painful when news broke of her passing.

Dr Oz had also heard that Carrie had an eerie premonition. Musical artist James Blunt was a good friend of Fisher’s and even lived in her house while he was making his first album “Back to Bedlam.” He even named the album that because Fisher’s house seemed like a madhouse to him. James recalled one day that Fisher surprised him with a cardboard cut-out of Princess Leia. On it, she had written her date of birth and an estimated date of death, which James later realized was dead on.

It was no secret that Carrie Fisher had a dark sense of humor, but it’s still certainly creepy!