Supermodel Christie Brinkley has long been called one of the most beautiful women in the world. Today, she came by Dr. Oz to talk about her anti-aging secrets.

Christie Brinkley said that she’s very grateful for her life and everything in it. She said your age is ultimately determined by your attitude. She lives by the expression “Bloom where you’re planted”. 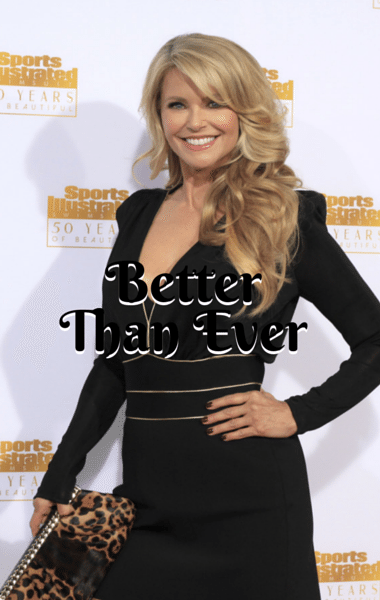 Dr. Oz talked to Christie Brinkley about how she looks so young at 61 and she shared some of her beauty secrets, including exfoliating and eating well. (Helga Esteb / Shutterstock.com)

Dr. Oz showed a picture of Christie Brinkley on the cover of Sports Illustrated when she was in her 20s and a recent picture of her on the cover of People. It’s remarkable how little has changed in her appearance. In both pictures, she’s photographed in a swimsuit.

Christie Brinkley said when you feel great and feel energetic, you look better. But her primary concern is whether she feels good, not whether she looks good.

Christie Brinkley is part of a campaign called Better Than Ever, where they use mature ladies and put them in photographs where they’re being appreciated by younger men. In one photo, Christie Brinkley is standing on a park bench while lots of good-looking shirtless men reach toward her. Christie said the campaign focuses on “more experienced” ladies, because she didn’t want to say “older.”

She said there’s a real move to expand what we think of as beautiful to include all ages, ethnic groups, and sizes.

“I think every time we expand to be more inclusive, that’s beautiful,” she said.

Recently, an unretouched photo of Cindy Crawford was leaked online, showing her the way she really looks. It sparked a debate about the pressure magazines put on women. Christie Brinkley said that she just recently shared a dressing room with Cindy Crawford and she looked incredible. She said Cindy takes good care of herself.

Christie Brinkley’s children, Alexa, Jack, and Sailor, all help her stay young. She said they have a lot of passions and she tries to keep up with them. Alexa is also the daughter of Billy Joel and she inherited his talent. She’s performing in Manhattan right now.

Christie Brinkley became a vegetarian as a teenager and has never eaten a piece of meat since. She said she loves animals and didn’t want to be a part of that system. But she also said she’s gotten plenty of health benefits from her diet.

She starts her day with dinner. She eats lots of great leftovers. She generally has some sort of grain, such as quinoa or lentils, along with lots of vegetables and some oil and vinegar. She also has some warm water with lemon in it in the morning. Christie also draws images on the foam of her cappuccino, which she shares with her followers on Instagram.

She loves mixing some probiotics with her berries. She said she learned this from Dr. Oz’s show and she takes notes during the show.

Her dinner is similar to her breakfast and for dessert, she has frozen bananas.

Christie Brinkley has exfoliated every day for 40 years. She said when she was young, she heard men age five years slower than women, because they shave their face.

Christie Brinkley has made her own exfoliant in her skincare line called Complete Clarity. She demonstrated how it worked on Dr. Oz’s face. She rubs it in with little circles. She said when she finishes exfoliating, her skin feels so soft and nice. She also has a day cream to repair the skin and prevent against the sun called Recapture Day that has no fragrance so even men can use it.

She also has a line of hair extensions for women to use to assist their hair in looking nice and full and youthful. Dr. Oz even tried one, which was really silly.