Dr. Oz kicked off his show by talking about new research that shows certain chemicals used in hair straighteners and relaxers could cause cancer. Many women use keratin hair treatments to straighten their hair until it’s nice and silky. Women love the results, but there are risks. Most keratin hair straighteners contain formaldehyde, which can cause breathing problems now and cancer later.

Dr. Oz sent investigative journalist Elisabeth Leamy to find out more about this troubling issue. She talked to Nikki Walton, a hair expert who advocates natural hair and blogs under the handle Curley Nikki. She said people want to know if these products are all-natural like the products claim, but they’re not. 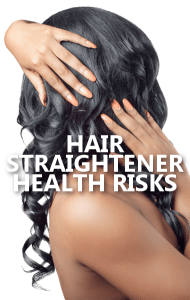 Dr. Oz cautioned against the use of keratin hair straightener treatments, because they could cause cancer. (MartiniDry / Shutterstock.com)

Elisabeth Leamy went to several hair salons and asked about possible dangers. Most were downright dismissive of any concerns. Only two of the salons she visited took precautions like wearing a face mask during the treatments. Elisabeth Leamy also kept hearing over and over that the formula they were using was formaldehyde-free.

But here’s the truth: related chemicals in keratin straighteners can turn into formaldehyde when heated. There only two salons that expressed concerns and told her she could get cancer from the treatments. Even so, those salons are still both doing keratin treatments because customers are still demanding them.

Nikki Walton joined Dr. Oz in his studio. She said people are still using keratin hair treatments because many women get fabulous results like straight hair for months. But they’re overlooking the health concerns. These treatments have been banned in seven countries already.

For the first time in summer 2014, formaldehyde was officially declared a known human carcinogen by the National Academy of Sciences. Just the act of opening the bottle causes fumes to be released into the salon. Then, when the material is applied to the hair, it’s often left there for up to an hour. That means the person is marinating in the fumes and so is everyone else in the salon. The flatiron, which is applied to the hair, is set to 450 degrees, and it burns the chemicals into your hair. The chemicals are even more active when heated. Now the entire salon is bathed in the chemicals.

Dr. Oz welcomed Natalie and Dawn, who used to work in salons as keratin specialists. They say they had chemical poisoning. Dawn said she had dizziness, rashes, headaches, breathing problems, and chemical sensitivities. Natalie said that stylists are more exposed than the clients by far, but even one treatment could cause health issues with the client. They both said they would never get keratin treatments ever again.

Once again, even keratin treatments that claim not to contain formaldehyde can still have formaldehyde. Formaldehyde goes under several different names and some chemicals release formaldehyde when heated.

Nikki said that one thing people can do to get straight hair in a healthy way involves getting a $15 heat protectant from the store and using a flatiron. She said you should keep the flatiron on the lowest setting.

Nikki said she didn’t think hair relaxers were safe, either. Hair relaxers permanently alter the texture of your hair, whereas keratin treatments are only semi-permanent. This is important because the more permanent the hair treatment, the more damage it does to the hair.

Both the no-lye and lye relaxers contain chemicals that are dangerous to the health, but Dr. Oz demonstrated the dangers of the lye relaxers with a concentrated lye. He added water and then put a paint brush in. The pain brush began to break down, which is what happens to real hair.

Nikki said if you insist on getting relaxers, you should see a professional. You should also stretch your treatments to once every eight weeks. Also make sure not to wash your hair prior to the treatments, because you need your protective oils to build up on your scalp and strands.

However, Nikki urged women to be healthy and embrace their natural texture.