Dr. Oz kicked off his show by talking about Human Growth Hormone. A number of celebrities and athletes have used the drug to look better and to have better athletic performance, including stars like Sylvester Stallone and Suzanne Somers. The controversial shots supposedly burn body fat, boost energy, and build lean muscle. Now, HGH is no longer for the Hollywood elite. More and more people are getting it every year, with an estimated 6,000 new patients getting prescriptions every year and more buying it online. 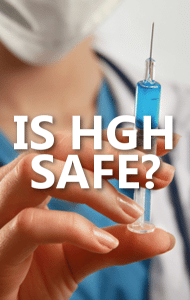 Dr. Oz talked about the dangers of Human Growth Hormone and sent an investigative journalist to find out what day-to-day doctors are saying about it. (sheff / Shutterstock.com)

Dr. Oz sent investigative journalist Elisabeth Leamy to a major American city far from Hollywood to find out what doctors who promote HGH are saying and selling. The doctors she spoke to claimed the drug would help patients look like they’re 20 and one said it was “known as the fountain of youth”. The doctors also downplayed side effects.

Studies show Human Growth Hormone may cause side effects like aching joints and raise the risk of getting cancer, heart disease, and diabetes. Then there’s also the question of legality.

Human Growth Hormone is only approved to treat a handful of rare diseases and deficiencies. One doctor Elisabeth Leamy talked to claimed it was perfectly legal to use Hormone Growth Hormone to age gracefully and another said everything he did was FDA-approved.

But the FDA told her it’s against federal law to distribute HGH for unauthorized uses and that using it for anti-aging hasn’t been proven safe. “If it’s not safe enough for the FDA, is it safe enough for you?” Elisabeth Leamy asked.

Elisabeth said she went everywhere from simple doctors to swanky anti-aging clinics. Some of the doctors she talked to offered to mix her up her own personalized HGH cocktail, so really, she would have no idea what she was putting in her body. It also costs up to $5,000 a month, which is a lot of money to pay to potentially put yourself at risk.

Dr. Oz explained that Human Growth Hormone is naturally produced in the brain and helps you grow throughout childhood. It also helps to maintain tissues and organs. When you’re a teenager, your brain produces a lot of HGH. It plummets dramatically in your 20s and declines naturally as you age for the rest of your life.

Some experts say boosting your Human Growth Hormone levels when they’re low back up to what it was in your twenties with man-made HGH can make you look younger.

Dr. Oz talked to Theresa about her decision to have Human Growth Hormone injections. She said she started it when she turned 54 and she weighed more than she’d ever had in her life. She started the injections four months ago and said it has “dramatically” changed her body and her life.

She said in four months, she lost 40 pounds and gained muscle mass. She said she did this without working out, adding that her legs look good now and she feels good about her waist.

Is anyone else weirded out by the fact that anyone would be more comfortable injecting themselves with a non-FDA approved remedy for aging and weight loss rather than working out and controlling their diet? In four months, with proper exercise and diet, you might not be able to lose 40 pounds, but you’d probably come close. What is she thinking?

The HGH injections work by entering the bloodstream and encouraging fat cells to break down. It also helps convince muscle mass to build and strengthens the bones. In theory, it helps you look younger.

So why are some doctors against HGH injections? Dr. Oz welcomed endocrinologist Dr. Jeffrey Mechanick, who said there’s no evidence right now that Human Growth Hormone has an anti-aging effect. He said it all comes down to a study in the 90s done on elderly men, where the results were misinterpreted. Now, he says use of this compound is out of control.

The concern about cancer, Dr. Oz explained, comes from the idea of taking Human Growth Hormone if you already have a small tumor. When you take the Human Growth Hormone, the compound will help the tumor to grow much more rapidly. So far, this is just theoretical.

Dr, Mechanick said in no uncertain terms that dietary supplements that say they contain Human Growth Human are a scam. There’s no way to absorb Human Growth Hormone orally. If you take it orally, it’ll be digested by the stomach before it can actually have an effect on you.