Dr Oz: Back Pain From A UTI

If you’ve ever suffered from back pain, you’ll want to pay close attention because Dr Oz claimed he was going to reveal the top ten secret reasons for your aches and discomfort. The first surprising reason is a UTI. Dr Oz explained that if you have pain in your middle to lower back, it could be because a urinary tract infection “backed its way into the kidneys” causing them to become inflamed. If a doctor taps on your back and it causes extreme pain, it could because of your inflamed kidneys and a UTI. Always be sure to drink a lot of water to avoid any urinary issues.

Dr Oz: What Heel Height Can You Wear? 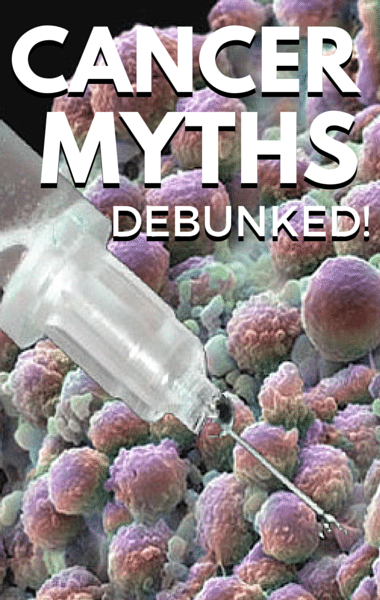 With so many myths about cancer floating around, Dr Oz wanted to bring in an expert to share the truth about the most feared disease. (ajc1 / Flickr)

Dr Jennifer Hartstein then explained that holding a grudge could actually give you some back pain. Your emotions have a direct correlation to your physical symptoms. Negative feelings increase muscle tension, so let that negative feelings go to release a lot of tension, especially in your back.

You could also be experiencing back pain from wearing the wrong heel height. To find the right heel height for you, sit down and hold your leg straight out, letting your foot relax. You then want to measure the natural angle between the tip of your toe and the heel. Measure straight down from the big toe to the heel and then the distance from the heel to the ruler. You can comfortably wear heels that are no more than that angle, to avoid back pain.

On an entirely different note, Dr Oz wanted to take the time to tackle some of the myths and misinformation going around about cancer. If your mom or grandmother ever told you eating too much acid causes cancer, sorry but they were wrong. It’s also not true that hair dyes increase your risk of cancer and the same goes for underwire bras and breast cancer. Antiperspirants and deodorant cause cancer? People with darker skin can’t get cancer? It’s just not true!

Dr William Li joined Dr Oz to reveal five more common cancer myths. He shared that he’s actually frequently asked about the connection between power lines and cancer, and wanted to make it clear that there was no connection! Numerous studies have shown that the electric energy emitted by power lines is actually shielded and weakened by other objects and isn’t harmful. The magnetic energy emitted by power lines is such a low form of radiation that it doesn’t damage our DNA.

Dr Oz: Is There A Cancer Cure Cover-Up?

A woman named Nicole wrote to Dr Oz saying that she’s heard there is a cure for cancer “that the government and big pharma companies are hiding from us.”

Dr Li stated passionately that it was a myth, explaining that he’s worked for 30 years on projects funded by the government, looking for cancer cures. As a doctor and a scientist, he can say that people, including those from the government and drug companies, working together in the fight against cancer. That research has already led to some cancers being curable, including some forms of lymphoma, leukemia, or thyroid cancer.

Then, a woman in the audience admitted that she’s a bit of a hypochondriac and was hoping to find out how to tell if a lump is cancerous. It’s a myth that any unusual lump on your body is cancer, because the truth is that many things cause lumps to show up on your body, most of which aren’t cancer. A fat deposit called a lipoma is one example if a non-cancerous lump. Just keep an eye on it to see if the lump grows, bleeds, or changes colors or texture, and see a doctor if it does.

If you feel a lump inside your breast or if you’re a man and notice a lump on or inside your “family jewels,” you’ll want to seek medical attention immediately just to rule out cancer.

Lastly, it’s an absolute myth that a cancer diagnosis is a death sentence. Dr Li shared that there are more than 14 million people living in America today who are cancer survivors. Most of those people are long-term survivors which means they’ve lived at least five years or more. Statistics show that the likelihood of dying from cancer has been declining steadily since the 1990’s. For breast, prostate, and thyroid cancers, the five-year survival rates can be as high as 90%.

Of course, it all depends on individual factors, including whether the cancer is fast or slow growing, whether it’s spread at the time of diagnosis, what treatments are available, and how healthy the patient is. “Today, the diagnosis of cancer is not, and I repeat, not an automatic death sentence,” Dr Li stated.