Doctor Oz talked about the meteoric rise in genetic testing for the genes BRCA-1 and BRCA-2, associated with Breast Cancer risk. Experts call this The Angelina Effect, crediting actress Angelina Jolie for her announcement of a Double Mastectomy in 2013.

Her emotional essay, published in the New York Times, revealed that she carries the BRCA-1 gene, which doctors estimated put her Breast Cancer risk at 87%. After the operation, her risk dropped to 5%. 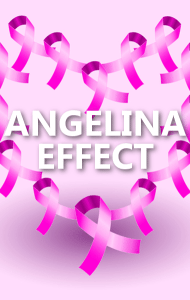 Dr Oz talked with a breast cancer expert about the Angelina Effect, after actress Angelina Jolie spoke out about genetic testing and her Double Mastectomy. (Sylvie Bouchard / Shutterstock.com)

Since her public admission, testing for breast cancer genes has doubled in the United States. Doctor Oz welcomed Dr Marisa Weiss, founder of breastcancer.org, to talk about The Angelina Effect.

Dr Weiss said that Jolie’s admission was brave and helped women get over their fears surrounding genetic testing for Breast Cancer. The Supreme Court also removed the patent on Breast Cancer gene testing, making it more widely available and affordable.

Dr Weiss said these developments have set the stage for new discoveries and advancements in medical science and cancer research. She sees the developments as a good thing, as women and men inquire about their family history and other cancer risk factors.

Who should be getting genetic cancer testing? Dr Weiss said you should examine your family history of all types of cancer. How does the testing work? She explained there is a simple blood test or a “swish and spit” method that collects a saliva sample.

A mini-test can cost $500-600, and a more extensive panel can cost between $3,000-5,000. However, Dr Weiss said that if a patient qualifies for this test, many insurance companies will cover the cost.

Inheriting these genes can dramatically increase your risk for developing Breast Cancer or Ovarian Cancer. However, information is powerful, and prevention, detection, and treatment are all options and opportunities that patients can have with this data.

What about having a Double Mastectomy, as Angelina Jolie did? Dr Oz wondered if too many women are following her example out of fear. Dr Weiss explained that it made sense in her case, but only about five to 10% of women have one of these high-risk genes.

“For women in general who get Breast Cancer, many of those women are choosing Bilateral Mastectomies,” she added. “It’s important to know that it doesn’t improve survival, and there’s a great alternative, which is Lumpectomy and Radiation.”

Dr Oz also got in touch with Dr Kristi Funk from the Pink Lotus Breast Cancer Center, the surgeon who operated on Jolie in 2013. Funk reported that Jolie continues to do well, and she agreed that improvements in genetic screening are great news.