Many of us fell in love with Dr. Jen Arnold and her husband Bill Klein when they began starring in a reality show about their life called The Little Couple. We have watched as they struggled to live in a world designed for “normal” sized people and felt the devastation when they had difficulty with adding children to their family, but nothing compares to the most recent scare when Jen was diagnosed with a rare form of cancer. She and Bill sit down with Dr. Oz to talk about her diagnosis and most importantly, to discuss how she is doing today. 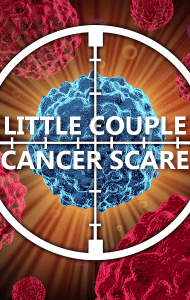 Dr Oz sat down with Jen Arnold and Bill Klein, stars of TLC’s The Little Couple, do talk about Jen’s recent cancer diagnosis.

Jen Arnold of TLC’s The Little Couple just completed her last round of chemotherapy after being diagnosed with cancer during the adoption of her and her husband’s second child, Zoey. Jen tells Dr. Oz that while they were in India about to finalize Zoey’s adoption she suddenly experienced bleeding that worried her so she immediately returned to the United States to see her doctor. Bill made the difficult decision to stay behind and finish the adoption process, but says he worried about his wife the entire time, hoping she would get home safely.

Since they had been through so much with infertility and surrogates, Jen says she never considered that she could actually get pregnant, but that is what happened. She explains to Dr. Oz that she experienced pregnancy symptoms and went to her doctor to learn she had a molar pregnancy that ended in a miscarriage. She was then monitored to be sure everything was fine and thought that was the end of it until the heavy bleeding occurred and she received a cancer diagnosis that is rare, but sometimes develops after a pregnancy.

Dr. Jen Arnold, who practices medicine at Texas Children’s Hospital, tells Dr. Oz that she made the decision to be treated there for her cancer because even though she had an adult disease, she needed to be in a place where there was equipment for taking care of smaller people, in case something went wrong. Her bigger concern was that chemotherapy dosing is usually based on height and weight, but since Jen is an adult her initial dose was not effectively treating her tumor. Her doctor told her they needed to come up with a dose to treat the tumor that would cause her to lose her hair, but not kill her, which was a huge challenge for someone Jen’s size.

Aside from being married, Bill says he and his wife have a very strong friendship, and this experience only worked to strengthen their connection. He added that he and Jen have a deal that he will “go” first, so losing his wife to cancer was simply not an option. Fortunately, they will have many more years together with their children because Jen is now cancer-free and doing well!