Have you heard of Silent Reflux? It affects up to 50% of American women, but its symptoms are silent. That’s why you need to know the symptoms so you can ask the right questions and catch it before it becomes a deadly cancer.

Sandra told her story of strange symptoms and shocking discoveries. She thought that her persistent cough and trouble swallowing were just allergy symptoms, and doctors agreed there was nothing wrong with her. But as time went on, her symptoms got worse and she knew something wasn’t right. 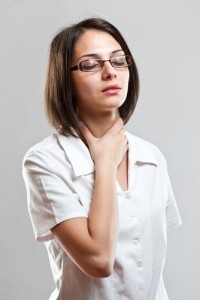 Dr Oz explained the Silent Reflux symptoms that are often misdiagnosed but could lead to esophageal cancer if undetected & untreated.

She could actually feel the food traveling down her esophagus. A test revealed she had Stage 3 Esophageal Cancer. After chemo, most of her Esophagus was removed, her stomach had to be stretched, and she had to re-learn how to swallow.

“You have to take your medical care into your own hands. If I hadn’t insisted on seeing a specialist, I wouldn’t be alive today,” she said. Sandra met Dr Oz in the studio and said she assumed she’d live with the symptoms for the rest of her life.

Dr Oz told her this could’ve all been prevented with an earlier diagnosis. She is mad because she reported her symptoms and made doctor’s appointments. But her complaints were dismissed or ignored.

Silent Reflux can be an early warning sign of Esophageal Cancer. But the symptoms can be similar to colds or allergies. Here are some things to watch for:

Dr Oz set up a free clinic to screen people for Silent Reflux, which isn’t well known even among doctors. In a mall, a medical team launched a pop up clinic to test for this condition and spread the word. There was a huge turnout, and even Dr Oz was personally involved in screenings.

Cindy has had choking and coughing problems for a decade. Her testing revealed reflux signs, and she was amazed to learn what was going on with her after all this time.

Donna Marie’s two sisters both have Barrett’s Esophagus. She wanted to get screened and find out if she’s at risk. She turned out to have the highest reflux score of anyone seen that day.

Also at the clinic was Christie, who happened upon the clinic while shopping. She had been told she had Asthma, and since she doesn’t have insurance, she isn’t keeping up well with her health. Dr Oz and Christie were shocked that she lived half her life with an inaccurate diagnosis.

Christie was in Dr Oz’s audience to talk about how she happened upon the screening event. She said the rasp in her voice was a recent symptom that had developed over the summer. She said she was angry to be taking the wrong medications for years.

“If things were caught earlier on, I would’ve been able to treat thing,” Christie said. She thought her prescriptions might not be strong enough because they didn’t relieve her symptoms.

Do you have these type of symptoms? What would you do if you’d lived most of your life with an inaccurate diagnosis?