Dr Oz: What is Radical Remission?

Dr. Oz says that a diagnosis of cancer is what we all fear the most, but there is a new phenomenon called Radical Remission where terminal cancer disappears without any medical explanation and it has been leaving doctors baffled.

Dr Oz: How to Beat Cancer with Radical Remission 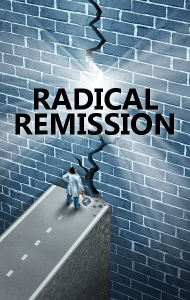 Dr Oz talked to Dr Kelly Turner about a book she wrote titled Radical Remission, which is a phenomenon where patients heal themselves from cancer after modern medicine has failed.

Radical Remission is a when terminal cancer literally vanishes after Western medicine has failed a patient. Dr. Oz talked to a woman who was diagnosed with breast cancer at the age of 35 and then went through several surgeries, radiation, and many rounds of chemotherapy only to be given 5 years to live. She says beating cancer became a priority for her so she focused on emotional and spiritual healing because she believed if she could get her mind and body positively connected then she would be able to heal. After only 18 months she was found to be cancer-free and has now been in remission for 13 years!

Dr. Oz says we spend so much time looking at patients who die from cancer, but we rarely look at those who have experienced Radical Remission, which is nothing short of a miracle. He looked at this woman’s medical records and says it is absolutely remarkable that that she not only survived cancer, but that she experienced such a radical health transformation.

Dr. Kelly Turner, author of Radical Remission, says it is very hard to talk about something that is so hard to explain, which is why she believes Radical Remission has not been discussed more in the medical community.

Dr. Turner performed extensive research for her book and learned that the most common lifestyle change among those who had experienced Radical Remission was a complete commitment to positive thinking. While she says nobody is able to be positive every minute of every day, spending just 5 minutes a day feeling joyful or grateful about something can have a huge impact on your health. It will literally send a surge of immune-boosting hormones throughout your body, which will then fight disease, even cancer like in the case of Radical Remission.

Are you tired of feeling constantly drained of your energy? If so, Dr. Oz has an all-natural solution called Oat Straw Extract that will give you energy to last all day long without the constant crashes like those caused by popular energy drinks.

Combine all ingredients in a blender and sip to enjoy a natural energy boost that lasts all day long.

Dr. Oz shared one of his favorite public service announcements that hopes to change the way we think about tobacco addiction.