Actress Shannen Doherty has been in the spotlight since she was just 10-years-old. But now, the beautiful star is facing a medical crisis. Shannen first rose to fame when she starred on Little House on the Prairie. She was then cast for the hit show 90210, before starring in the same director’s show Charmed. She’s been working as an actress, producer, and director ever since. But in 2015 it was leaked that Shannen was battling breast cancer. She sat down with Dr Oz to discuss her journey, with her husband Kurt Iswariendo sitting in the audience.

She was 44-years-old when she got the call from her doctor. She first thought about her family and wondered how she was going to tell them. She said that was the hardest part for her. Shannen is very passionate about helping others going through the same thing. Her father’s side had cases of breast cancer, but her mother’s side was always very healthy. She discovered the lump herself when she was in the shower and felt something that “was a little odd.” 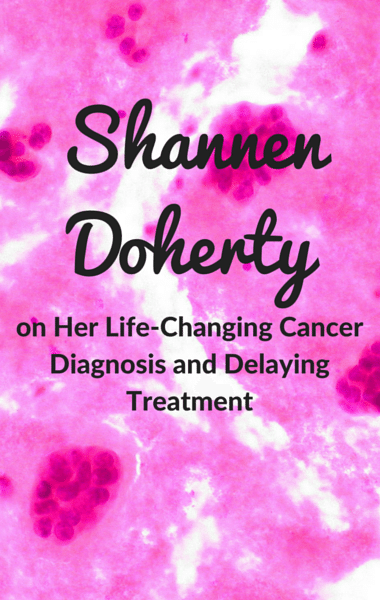 Shannen Doherty sat down with Dr Oz to discuss her breast cancer diagnosis and why her treatment was delayed. (euthman / Flickr)

She tried to convince herself that she was fine until she decided she should get it checked out. She further explained that she was with a business manager at the time he was making 5% of everything she made. Her business manager took care of everything, including her health insurance, taxes, and everything else. She found out that they hadn’t paid her health insurance and she was past being eligible for most options. Therefore, she didn’t go to the doctor when she needed to, knowing that she had a lump in her breast.

Shannen acknowledged that the most important thing is catching cancer early. Dr Oz revealed to Shannen that his entire audience was actually filled with breast cancer survivors who were overjoyed to hear Shannen’s story. She admitted that she felt like Superman, as if nothing could harm her, and now she feels more like a “lemon” that she wants to return to the dealership.

Once Shannen began treatment, as much as she loved her doctors at Cedars-Sinai, she feels that it’s important to question what the suggest and ask questions about alternatives. She wanted a treatment that would work best for her, and found that vitamin C IV’s worked well for her. She shared that she tuned everyone else out and figured out what was right for her, using a lot of prayer. She hadn’t yet had surgery and is waiting to see if her medication will shrink the tumor. She also cut off all estrogen, hoping it will shrink the tumor which is fueled by estrogen.

Shannen added that she actually isn’t nervous that the tumor is still inside her, because she didn’t want to rush into surgery and wish she had done something different afterward.

What was incredibly ironic, was that Shannen’s character in 90210 found a lump in her breast as well, which made Shannen feel responsible for portraying a woman with breast cancer, especially as a teenager. More than anything, she wants to help women going through breast cancer to see they aren’t alone.

Are you inspired by Shannen’s battle with cancer? Do you agree with her decision to wait to have the lump removed? You can read the rest of Shannen’s interview with Dr Oz here.