Legendary broadcaster came by Dr. Oz to talk about his 16 month battle fighting cancer. Tom said he’s doing a lot of the things he did before like running and hiking. But because his type of cancer attacked the bone, he also has some bone damage. 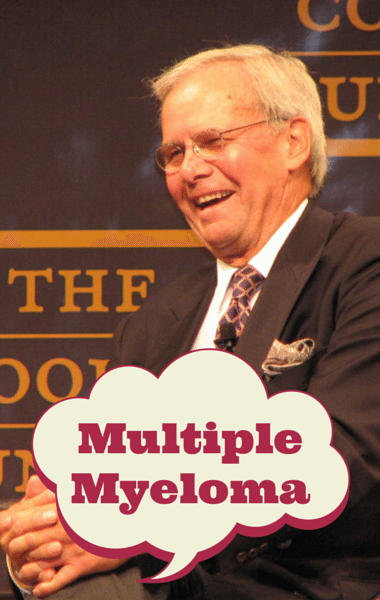 Dr Oz talked to legendary broadcaster Tom Brokaw about his 16-month battle with cancer, how he stays positive, and how lucky he feels about his life. (davidberkowitz / flickr)

When Tom discovered he had cancer, he approached it like a journalist and started writing journals, which he turned into a memoir called A Lucky Life Interrupted.

Tom Brokaw said that although he has cancer, he knows he’s lucky because he has the access and money to get the best doctors and he has a great support structure. He also said that while people can be supportive of people who have cancer, you can’t understand what it is like until it hits you or your family.

Dr. Oz: What is Multiple Myeloma?

Tom Brokaw’s multiple myeloma started with severe back pain. He warned men of his age that if they have a backache, don’t just go to an orthopedist. Get a blood test, because this type of cancer strikes men especially in their mid-60s.

Dr. Oz showed Tom Brokaw some bone marrow and the two put on the famous purple gloves. Dr. Oz said that white blood cells, which help fight infection, collect in the bones. But if the white blood cells become defective, they can grow in between the bones and push out the healthy cells. Tom Brokaw had this happen in his spine and his pelvic area.

Tom Brokaw said that when he was diagnosed, his doctor told him he’s lucky because 50 percent of the progress in fighting this disease has happened in the last five years alone. Every month, doctors get better at treating it.

Multiple myeloma is an incurable disease, but it’s treatable. Tom Brokaw said he’s always stayed a positive and his wife has always done a good job of calming him down and reminding him they still have each other.

He also said he doesn’t take anything for granted and his tolerance for things he doesn’t care about is low. He just concentrates on things and people he really cares about.

Tom Brokaw read the last few sentences of his book, which said: “It is not enough to rage, rage, against the dying of the light. It is also time to quietly savor the advantages of a lucky life and use them to fill every waking moment with emotional and intellectual pursuits worthy of the precious time that we have. Life, what’s left? Bring it on.”

Tom Brokaw said he’s decided to write more and spend more time saying no to things. He also wants to hang out with his grandchildren more.