Dr. Oz talked about how diet foods may be making us fat. Say what? It’s true! Dr. Oz welcomed registered dietitian Dr. Sharon Richter, who helped audience member Mia learn how her diet food choices may not be the best thing for her. Mia said the ingredients of diet foods are confusing. So she ends up buying what she wants and she ends up getting fat.

Dr. Richter said a lot of so-called “diet” foods add sugar and salt to make up for getting rid of the fat or some other ingredient. 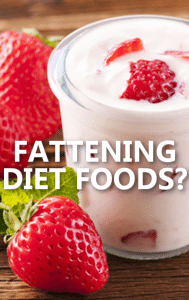 Dr. Oz talked about many diet foods that are actually making us fat, including Greek yogurt, which sometimes has a lot of sugar in the fake fruit at the bottom. (HLPhoto / Shutterstock.com)

Mia loves Greek yogurt and eats one a day. She buys whichever one is on sale and loves the kind with fruit in it. Dr. Oz said he also adores Greek yogurt. Some kinds are fantastic for you. But Dr. Richter said sometimes, they’re loaded with sugar. Fruit-flavored Greek yogurt will have a lot of sugar in it.

Mia suggested eating plain yogurt. If you don’t like the taste, put frozen berries in the microwave to make a syrup. You could also add cinnamon or cocoa powder, so you flavor it with no added sugar.

Hummus is one of Dr. Oz’s favorite foods. But it can be an issue. Most of us just get a bunch of hummus on the chips or pita bread. But that’s a problem, because we’re packing what is basically one serving on top of the chip or pita. Hummus is great because it has fiber and protein, but make sure not to overdo it.

Dr. Richter suggested adding plain Greek yogurt to the hummus to add protein and calcium and to allow you to have as much as you want. She also suggested eating it with celery instead of chips. Mia said it was tasty, but I don’t know. Yogurt and hummus? I’m not sure about this, Dr. Oz!

The next food was cottage cheese. Most people go for the fat free cottage cheese, but there’s a problem. When they get rid of the fat, they replace it with salt. People watching their weight also have to watch their sodium intake.

Dr. Richter recommended switching it out for low fat cottage cheese or ricotta cheese. If you eat the ricotta cheese with cucumbers and tomatoes, you’re not adding extra calories, you’re adding nutrients.

Dr. Oz gave 20 members of the audience $1 and asked them to pick the healthiest snack from the vending machine. Out of the 20 people, 14 chose trail mix. Mia said she eats trail mix a lot while she’s driving.

The problem with trail mix is that the fruit in it is covered in sugar, some foods are fried, like the fried bananas, and it has chocolates in it. But we can make our own healthy trail mix with nuts, freeze-dried fruits, popcorn, and dark chocolate chips. Now, this something I can get behind! That sounds delicious.