Would you believe that you can actually shrink your stomach and achieve a flatter belly in just one week? Dr Oz believes it’s true, which is why he kicked off his Friday March 4 episode by talking about his plan to help you get “flatter by Friday.” If it’s Friday and you have an event next Friday, but you desperately want to look and feel slimmer in that short amount of time, there’s no better person to help you than Chris Powell!

Chris joined the show and said it’s incredibly realistic to expect weight loss in just one week. He first explained that when you “clean things up” there’s certainly some fat loss, but there’s a lot of water loss. Typically, when you first make changes, you’re reducing the amount of processed carbohydrates in the body. Also, when you reduce your sodium intake, it helps get rid of all the water your body has been holding on to. 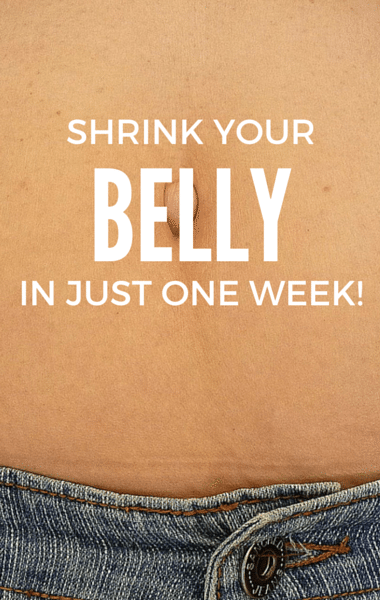 Dr Oz and Chris Powell revealed a plan to help you achieve a flatter belly in jus one week. (zeevveez / Flickr)

To better understand what Chris was talking about, Dr Oz suggested you think of your body as a house, and fat, water, and bloat are friends or family who want to stay as house guests. First, is water weight, which comes from sodium and processed starch. Water weight can cause a puffy face, and is the first type of weight you lose. Then there’s bloat, which is gas created in the gut during digestion, which is lost after you eliminate the food you ate. When bloat comes back over and over, that’s when it becomes a problem. Finally, there’s fat, which is caused by excess calories from processed and saturated foods. Fat takes the longest to get rid of.

Chris had a plan that he argued will make you flatter by next Friday. First, you need to eliminate most processed carbohydrates, sugar, alcohol, and artificial sweeteners. Eliminating those fluids will allow you to eliminate a lot of fluid in your body. For example, one donut can cause you to hold onto an extra 1/4 cup of water. One gram of carbohydrates holds onto three gams of water in your body. So if you think about all the carbs you’re eating throughout the day, that could be a lot of water!

Chris then suggested you enjoy protein with a healthy fat for breakfast. Try an avocado with egg, and enjoy a little corn tortilla on the side. Enjoying a small amount of the right carbs can help you avoid temptation for processed carbs. Go ahead and sprinkle some cayenne pepper on the avocado and egg as well for a bit of a metabolism boost!

Chris suggested a carb curfew, which means after lunch, you won’t be eating carbs for the rest of the day. When you sleep, your body releases human growth hormone. If your insulin goes up at night because of carbohydrate intake, it hinders your body’s ability to produce human growth hormone, which is what makes you feel good, look young, and burn more body fat. For lunch, try a turkey burger lettuce wrap, a sweet potato, and asparagus, which contains an amino acid that triggers your body to release more water.

Finally, you want to build a cleanse salad for dinner. Pick a healthy base like lettuce or cucumber, then add some color with beets or tomatoes, and then add crunch with asparagus, celery, artichokes, or another veggie. Then toss in some protein whether it’s chicken, salmon, or another healthy, lean protein. Finally add some fat like olive oil, sunflower seeds, or walnuts. You can load your plate with those ingredients to make a healthy and filling dinner!

Dr Oz: Liquid Snacks To Fill Up Between Meals

As for how to stay full between your big meals, Chris suggested liquid snacks. First, determine what kind of snacker you are. Are you a chocolatey, sweet, salt, or caffeine snacker? The majority of Dr Oz’s audience were chocolate snackers, but salty came in close second. Then was caffeine snackers, followed by 16% who were sweet snackers. You can convert those flavors and turn them into shakes!

If you’re a chocolate lover, try a chocolate shake made with cocoa powder, oatmeal, unsweetened vanilla almond milk, avocado, Greek yogurt, and a little honey. The avocado gives the shake a creamy texture and you truly can’t even taste it!

If you’re constantly reaching for sweets, try a pineapple and green drink. Blend together spinach, water, banana, pineapple, fresh lime juice, and chia seeds. The woman who tasted it was shocked at how good it tasted! For salty snack lovers, try blending Greek yogurt, unsweetened vanilla almond milk, spinach, a banana, and pistachios.

Finally, if you’re all about the caffeine, try an iced protein latte made with unsweetened vanilla almond milk, ice, cold black coffee, half a banana, and vanilla protein powder.