Dr Oz featured a woman named Marjon who is addicted to food.  He said that she does not feed her body, she feeds her addiction which is slowly killing her.  Marjon is a Food Addict and so her entire world is consumed by food.  She said she loves sweets and thinks about them all day and night.  She even wakes up in the middle of the night to go to a 24 hour grocery to buy her favorite ice cream.  Marjon told Doctor Oz that if she does not get her sugar, she becomes irritable, moody and antsy.  Most of the time she would rather be alone and eating a pint of ice cream than to be out with friends… and she’d rather pay her rent late than to go without as much food.  So Dr Oz sent Brad Lamm to help her out.

Brad Lamm went to Marjon’s house to try and help her.  She said that she travels a lot for work and showed Lamm how she scopes out all of the 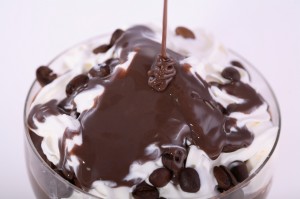 24 hour grocery stores, restaurants and bakeries in the area – these are like her drug playground.  Brad Lamm said that addicts only stop thinking about their drug when they are sleeping or dead.  Marjon said that she totally knows how to work the system at the hotels too.  She builds a relationship with the people at the front desk so that she can get food anytime she wants.  Her real scare was when she went to the doctor last week and was told that she has high blood pressure and is obese.

Doctor Oz asked Marjon if she thinks it is normal to scout out locations for food, to befriend people who give her food and to go out in the middle of night to get food?  She said it is part of her normal routine and just something she does, but she does not think she has a problem.  Dr Oz asked her why she would rather sit at home with ice cream than to go out with other people on a Friday night.  She said that food is predictable and people aren’t.  She knows that when she has her favorite foods, it will taste a certain way and make her feel good.  If she goes out with friends, she does not know how they will act or if they will get on her nerves or not.  Dr Oz said that this sounds compelling, but that it truly shows that she is addicted to food.

Dr Oz went on to ask her what are her hopes and dreams for her future if she gets past this food addiction?  She said she wants to work at a fuller capacity, rather than at about 40% like she is now.  She wants to be a true diva and go back to singing.  She also wants to pursue grad school, host more parties, go out more often, go shopping with her family and mother and do many more things socially.  Brad Lamm said that he is especially concerned that she thinks food never lets her down, because this is an addiction pure and clear.  Food Addictions might not let you down, but they will kill you.

Dr Oz asked Marjon why she always smiles?  She said she is hiding her low self-esteem and her true feelings.  She lives alone and far away from her family, so she puts up a fake facade so that people think that everything is ok.

Doctor Oz sent Marjon to the Truth Tube and here are her results:

Dr Oz said that her blood pressure is at a level where people often have strokes.  If someone in the ER has a blood pressure like this, they often do not get to go home.  And the BMI or Body Mass Index shows that Marjon is morbidly obese, which means she has a bi risk of mortality related to her weight.

Dr Oz spoke to her mother who said that they always encouraged Marjon to work-out and to eat correctly, but they had not idea that food had completely taken control of her life.  Doctor Oz asked her if he replaced the word “food” with the word “drugs”, would you see that this is an addiction? And she said absolutely.  Brad Lamm said that food is the number one addiction in the US that we do not even talk about.

In the next segment, Dr Oz introduced Marjon to Tennie McCarty from the Shades of Hope Treatment Center.  Click here to read about how Marjon will get helped for her Food Addiction.