Elvis Duran is one of America’s best-known radio DJs and he came by Dr. Oz to talk about his health. You may have heard his voice on Elvis Duran and the Morning Show, the nation’s number one Top 40 show. But Elvis has not had the same level of success controlling his weight.

A few years ago, Dr. Oz visited him on his show and shocked him with his blood pressure numbers. His blood pressure was 165 over 110, which is so high that he had a real chance of having a stroke any day of the week. Elvis later came on Dr. Oz and admitted the severity of his health crisis had sunk in. 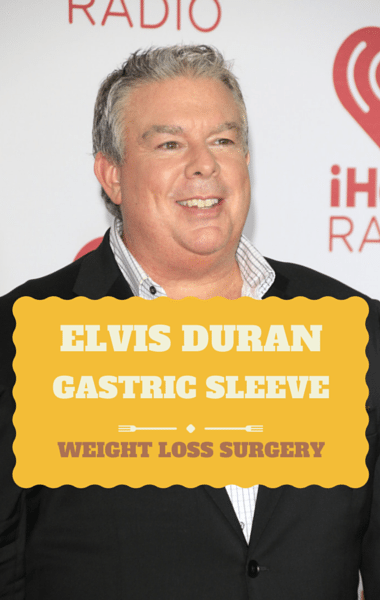 Dr. Oz talked to radio personality Elvis Duran about his decision to take control of his own health and have a gastric sleeve surgery, which removes 85 percent of his stomach. (Helga Esteb / Shutterstock.com)

This past year, Elvis made a major change in his life. He underwent gastric sleeve surgery, a procedure that removes 85 percent of the stomach, which restricts the amount of food that can be eaten. This causes patients to be less hungry less often.

Elvis is back on the air and his weight is coming off. He’s lost 28 pounds in the three weeks since he’s had the surgery and he’s encouraging his listeners to get serious about their health, too.

Elvis Duran has tried a number of different diets and exercises before and hadn’t been able to get to where he wanted to be. But this past year, he turned 50 years old. He also lost both of his parents, who he said didn’t pass away quickly, instead they “took their time passing away.” He felt that health choices his parents made, particularly his father, caused them to pass the way they did. Elvis didn’t want that for himself.

He also said he wants to wear cool clothes and not lose his breath walking up the stairs. But he never was able to take the right steps to make it happen. Now, he has made a serious decision.

Dr. Oz said that a lot of people think a gastric sleeve surgery is a “cop out.” Elvis said it’s not a cop out because it involves hospitals, needles, and a lot of intense things. He also had to relearn how to eat. He almost couldn’t do it because he felt his stomach was “his buddy.” He was born with his stomach and it was there for all the chicken parmesan and bottles of wine. It’s a permanent removal of a large portion of an organ and because of that, Elvis said it’s not a cop out.

The gastric sleeve surgery works because doctors take a large portion of the stomach away. This forces the body to only accept a certain amount of food, which causes weight loss. With a normal stomach, you can fit a lot more food in, even when you’re full.

Most people lose about 60 percent of their excess weight with this surgery, but it does come with a lot of changes to the lifestyle. Elvis said you have to relearn how to eat. He’ll have only four or five bites before getting full. At the same time, he needs to eat well. He said it’s a big change, but to reap the benefits, he had to make the decision to make his weight loss permanent.

Elvis Duran said that if you’re considering it, you need to talk to your doctor. It’s also important to talk to people who went through the procedure so you know what you’re going to go through.

Kathy is a huge fan of Elvis Duran and she read a letter she wrote to him. She said in her letter she was tired of being overweight, of not fitting into roller coasters, getting out of breath from walking down the street, and not being able to start a family with her husband.

Kathy started to cry as she read the letter. She said Elvis was a huge inspiration to her and because of him, she was taking steps to control her own weight. She said Elvis has changed her life. Elvis said the truth is, Kathy changed her life. He said Kathy loves herself and she’s making efforts to change her health. He appreciates the credit, but he wanted her to know it was her decision and that she’d taken control of her own health.