If you’re trying to avoid extra salt in your diet, there’s a good chance you already knew to avoid foods like pickles, French fries, and even some canned soups. But there’s a secret the food industry doesn’t want you to know. They’re called salt bombs and Dr Oz wanted to be sure you’re aware of them so that you can be more conscious of your salt habit and know exactly what you’re eating.  Plus, Dr. Oz shared a fantastic Mineral Boosting Juice recipe that stops your salt cravings!  Who knew that a Mineral Juice could do that?!?

First, Dr. Oz sent Dr Jennifer Caudle to find out more about those so-called “salt bombs.” She often sees salt sneaking into her own patients’ diets and explained that too many patients and even some doctors are uneducated when it comes to the truth about salt. That’s exactly why she wanted to educate herself and others about the dangers of salt.  You will be shocked by the top Salt Bombs on the next page… 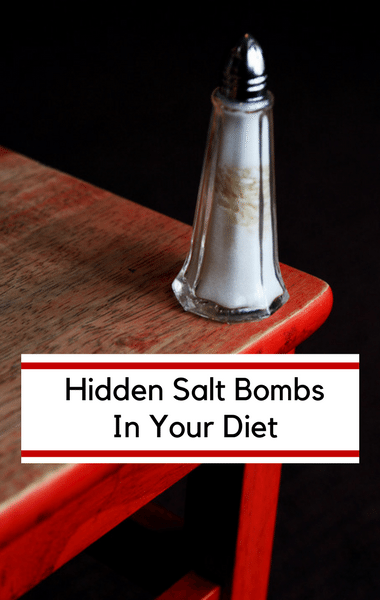 Do you really know how much sodium you’re consuming each day? Dr Oz learned more about hidden salt in the American diet. (quinndombrowski / Flickr)

How Much Salt Should You Eat Each Day?

The average American consumes 3,400 mg of salt per day because it makes food taste good. That’s exactly why the food industry sneaks salt into all sorts of food, hoping to train our brains to crave foods. Companies use many tricks to make you believe you’re eating lower calorie, healthy options.

Dr Caudle and Dr Oz’s team of experts combed through supermarkets to look for hidden salt in ingredient lists as well as ways you could be tricked into buying foods you think are healthy for you, but actually aren’t.

How Much Salt Do Americans Eat Every Day?

Nutritionist Maya Feller explained that the over-consumption of salt is wound up in the fact that Americans basically don’t know what food tastes like without it. Additionally, they don’t understand the risk factors associated with consuming too much salt like diabetes, hypertension, cardio diseases, and heart disease.

Additionally, the type of salt you eat matters too. There’s flake salt that sticks to food better and manufacturer claim because of its triangular shape, it sticks to food better than some other versions of salt. It also dissolves well and can add a bit of a crunch. But the salt you typically see on a table to add to your meal is shaped in a cube. Plus, flake salt dissolves quicker and hits your brain faster which means you’re more likely to crave those foods. For manufacturers, more cravings equals more profits.

Dr Oz broke down food into three major salt bomb categories. The first secret salt bomb was breakfast foods and baked goods. Salt makes sugar taste sweeter and your cookies taste crunchier. A slice of bread can have up to 600 mg of sodium, which is 1/3 of your daily allotment,

Why Does Chicken Breast Contain So Much Salt?

The next big salt bomb is juice. Even vegetable juice can loaded with salt. Just one cup can have up to 800 mg of sodium! Finally, there was boneless, skinless chicken breast. A lot of time, companies “pump up” the chicken breasts with a salt water solution to make it thicker, juicier and more appetizing.

Dr Oz then turned to Lucas and Marcia who were soon to be married. They admitted they love salt so much, they actually bicker over the salt shaker. Marcia was worried because high blood pressure runs in Lucas’ family and they both notice how salt can affect physical activity even when they just go on a simple hike. Fortunately, Dr Caudle came up with a salt-lovers guide to cut back on salt

First, you want to drink a Mineral Boost Juice. The key mineral is potassium. Potassium helps lower blood pressure by slowing down the effect of sodium on the body. For the ingredients necessary to make this tasty juice, continue on to the next page…

Simply blend the following ingredients in a blender until smooth.

Go ahead and drink your homemade Mineral Boost Juice every morning.