Dr. Oz introduced a self-proclaimed “pear-shaped man”, who gained and lost the same 40 pounds for 15 years. Now at a healthy weight, he came by to share his secrets to end yo-yo dieting. His name is Ted Spiker and he’s a friend of Dr. Oz. Ted said he didn’t store weight where men normally do, in the belly. His weight issues started early. He had trouble finding clothes and in college, his roommates called him Hoover for eating food so quickly, and he once had a doctor ask him if he got embarrassed on the beach because of his “femininely-shaped hips and chest.” 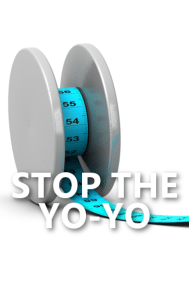 Dr. Oz talked about yo-yo dieting and how we can overcome problems like late night snacking, cravings for baked goods, and overcoming what the scale says. (Olivier Le Moal / Shutterstock.com)

He said he has a personal perspective on weight, but he also has an expert perspective, writing and reporting on health and fitness for his career. These twin perspectives help him identify what we know and how we apply it to our own lives.

Ted Spiker said he thought the two things that cause people to yo-yo diet is that we’re afraid to fail and we get derailed when progress stops. If we have a little failure like eating a dessert, we say forget it and declare the diet over.

One woman in the audience said she’s gained and lost the same 30 pounds. If she sees she lost a couple pounds, she decides to eat an extra French fry or two. But if she gains, she gets really disappointed.

Ted Spiker said she should surrender the scale. There are positive things about the scale, but most of the time when we think we’re doing great on our diet and we’re doing awesome in our exercise and we’re convinced we’ve lost 12 pounds, we might get on the scale and see we’ve gained a pound for some reason. This can derail you and cause you to go eat something bad for you. He said you should track something else like steps, glasses of water, or squats. Track that data instead. Along the way, the effect will be that you’ve lost the weight.

Margaret in the audience said she’s gained and lost the same 50 pounds. She works for a church and she works with ladies who bake great goodies. She wanted to know what to do to stop being sabotaged in her diet.

Ted said that you should use the If/Then statement. You take your weak spot and create an If/Then statement to do with it. Ted said his weakness is Mexican food and claimed he “once got a nosebleed” from eating 12 tacos. He said now, he’ll say to himself, “If we’re going out for Mexican food, then I order a grilled chicken salad with salsa.” Maybe he’ll have a few chips or eat a taco, but he doesn’t let himself go crazy. So for baked goods, say to yourself, “If the baked goods come, then I’ll do this” and come up with a reasonable plan.

Another woman wondered how to overcome late night snacking. Ted said he likes to take a bowl of berries and put a few pieces of dark chocolate in there, so you get a few treats. He said most people eat one chip and want to stop, but who stops at one chip? Instead, with the berries, you’ll be able to keep eating and stuff your face and get a treat or two, but be healthy at the same time.