Dr Oz recently reported on Griffonia Simplicifolia as a natural appetite suppressant.  This West and Central African shrub has seeds that produce chemicals that act as an appetite suppressant. The Griffonia Simplicifolia Seeds produce 5-Hydroxytryptophan (5-HTP) which raises serotonin levels in humans. It has also been known to regulate mood and promote a healthy sleep pattern. 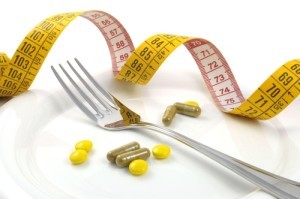 Griffonia Simplicifolia or 5-HTP can help suppress your appetite naturally.

Dr Oz recommended a dosage of 200mg of Griffonia Simplicifolia a day. This seems to be pretty much in the sweet spot as most other sources suggest a dosage of somewhere between 50mg and 300mg a day. In extreme cases, up to 600mg have been prescribed per day. It ultimately depends on why you are taking Griffonia Simplicifolia. In addition to being used as an appetite suppressant, it is also often used as a mood elevator or to combat insomnia (and to fight headaches).

It should be noted that Griffonia Simplicifolia taken by itself has an extremely low side effect rate.

Griffonia Simplicifolia should not be taken in concert with any anti-depressants. Some serious side effects may occur such as confusion, anxiety, increased heart rate or other unknown ailments.

It is also possible to overdose on serotonin. Consuming too much serotonin is actually a life-threatening condition called serotonin syndrome.

Serotonin is a neurotransmitter that has been linked to feelings of well-being and happiness. In fact many antidepressants that are among the most prescribed medications in the world work to increase the amount of serotonin in your brain. With Griffonia Simplicifolia, you can get that serotonin naturally and reduce depression and anxiety. In addition, the side effects are less severe than those for antidepressants.

Disclaimer: Do not take Griffonia Simplicifolia in concert with any anti-depressants. Do not stop taking your anti-depressants without talking to your doctor first. Please don’t self-medicate. Anything that you take in order to alter your mood should be discussed with a doctor first.