First Lady Michelle Obama joined Dr Oz for a special conversation about Obesity education. What does she think about the president’s diet, and how does she approach the Obama daughters’ nutrition?

But while he had the First Lady in the hot seat, he had a few questions about the ongoing reelection campaign. What’s it like being First Lady? How does she deal with the stress of another campaign?

“We view our roles as service, and Barack and I, we truly both get energy from people,” she said. “We enjoy the work that we’re doing. We enjoy the roles that we have.” 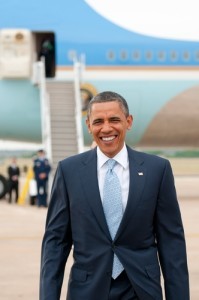 She said that immersing herself in her work is a great stress buster, but the couple also love to hit the gym to de-stress. They do their best to eat well and rest. She also said that their kids are a huge stress reliever.

Dr Oz wondered what will happen if President Barack Obama does not win reelection in November 2012. Will health be the First Couple’s enduring legacy? Michelle Obama hopes they have started positive changes.

“Getting health reform passed is more crucial than I think people can even imagine,” she said, mentioning preventative care services (such as well child visits) that are now covered. Young adults can stay on their parents’ insurance until age 26 as well. She said these are just a few of the ways parents can breathe easier.

She also mentioned the new opportunities for uninsured and underinsured Americans, and the new rules regarding pre-existing conditions. There are so many different types of conditions that she said she doesn’t know anyone who might not have one.

Having to navigate the red tape of insurance is one reason that some people have stuck with jobs, but these changes could make it easier for them to get a new policy when changing employers. She said that these changes could save billions thanks to its provisions for preventative care.

“I am very proud of the work that my husband has done to fight to make sure that everyone in this country has access to healthcare, so yes, I do think that’s an important legacy,” she said.

Dr Oz got personal, asking the First Lady about any fears she has about her own health in the future.

“I think probably because my father had MS, and he contracted it at the prime of his life, I worry about those sudden illnesses that may be genetically linked, that you don’t have any control over,” she said.

She was also worried about Barack’s smoking habits, but she said he has finally kicked the habit. She admitted that their daughters were the motivating factor that finally put him over the edge.

“He wanted to be able to honestly say, ‘Dad doesn’t smoke, and I don’t want you to smoke,’” she said.

Dr Oz confronted the First Lady with pictures of her husband indulging in burgers, ice cream and pizza. He wondered what she thinks about his diet, but she said the key to her message is moderation.

She said he works out regularly and is conscious of his diet. But on the campaign trail (or if you’re just being polite), you will be invited to sample local delicacies.

Michelle Obama said she doesn’t talk about weight or body image with her daughters. Instead, she focuses on health education, and how diet can have physical consequences. She said that the First Daughters of course prefer fast food to healthier choices.

She said that they are starting to make the connection between diet and athletic performance in school. They talk about protein, for example, and the cause and effect between diet and energy.

“I try to give them the information that hopefully, through Let’s Move, we’re giving to families across this country,” she said. “Vegetables have a place because our bodies need them.”

The First Lady said she is first to admit that she would love to eat pie and French fries all the time, but she can’t do it because of the health implications

Dr Oz recalled Mrs. Obama’s story about collaborating with her pediatrician to get the girls’ health back on the right track. He said he loves using the BMI to help people measure their health growth.

She admitted that she got the kids started young, and said it was a great example of the benefits of preventative care. Parenting is hard enough, and she thinks that healthcare access should be a huge priority to make the job a little easier.