Dr Oz: Am I Normal Or Nuts? Food Habits

Dr Oz asked a panel of experts to join him in assessing the quirky food habits of audience members, who were turned in by their friends and family. Are these extreme and sometimes bizarre food and eating habits normal or nuts?

Dr Oz Normal or Nuts?: Eating Candy Like a Beaver 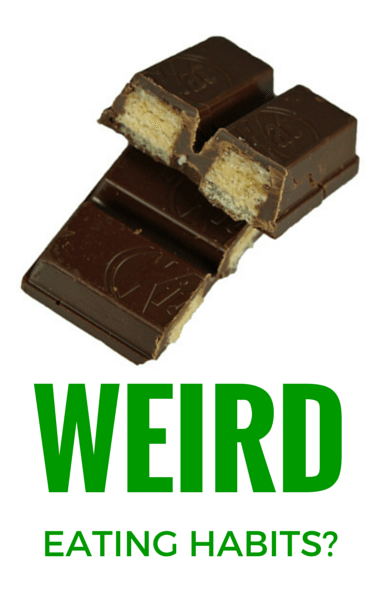 Dr Oz invited a panel of experts to pass judgement on some eating habits you may find out of the ordinary. (schoko-riegel / flickr)

The first victim was turned in by her mother, who said, “My daughter eats her candy like a beaver.” There was even a video of the young woman nibbling on a Kit Kat. Jennifer was shocked that her mother put her on blast. But the mom was concerned about whether there might be something wrong with her. Jennifer admitted that she is also weird about eating other foods, including broccoli.

The expert panel was divided in their opinions on this case. Nutritionist Heidi Skolnik was riding the fence. She said it’s a good thing to savor your food, as a child might do with an ice cream cone. Adults think of it as Mindful Eating, but in the extreme, she thinks this could be a problem.

Etiquette expert Thomas Farley, also known as Mister Manners, thinks it becomes an issue when it distracts the people around you. Maybe you can think of a noisy eater you know. Clinical psychologist Dr Jen Hartstein thought it was a good thing that could have a positive impact on portion control.

Next up, a woman tattled on her friend Mary, who has a phobia surrounding tomatoes. In a hidden camera video, this so-called friend even snuck a tomato onto her friend’s burger. Mary complained about the slimy texture. Her friend said this has aversion to tomatoes has been going on for years.

Dr Oz wondered what the root cause might have been, but Mary said she has always been that way. Dr Hartstein said it’s nuts, “but not as bad as it could be.” Selective Eating Disorder is being explored in adults, she said. Farley agreed, saying that you should always be polite when you are someone’s guest. Skolnik disagreed, calling it a normal food preference since it was limited to a particular food.

Then, Dr Oz’s own staff turned against him. Staffers reported that he is overly aggressive about sharing samples of unique foods. Apparently he wanders around the office giving away food all the time, which seems like a job perk to me! Dr Oz defended himself, saying that he loves to share some of the many gift baskets and snacks he receives.

But what did the experts think? Skolnik thought this was perfectly normal, even though it may annoy some of the staff. “It’s like an extension of love,” she said. Farley claimed this is nuts, but his issue was more about the staff not speaking up for themselves for so long. Finally, Dr Hartstein declared Dr Oz normal, saying sharing food could boost Oxytocin.