Dr. Oz said he got interested in something called Buti Yoga after his wife Lisa got really excited about it. Dr. Oz showed the before and after pictures of a woman who lost weight and got some great abs after doing Buti Yoga. It was the founder of Buti Yoga, Bizzie Gold.

Bizze Gold said that she’s been a yoga instructor for a long time. It was really hard for her to lose weight after her pregnancy, so she combined her favorite workouts into something that helped her drop the weight quickly and awakened a “female power” inside of her. It also helped her bring her life back together. 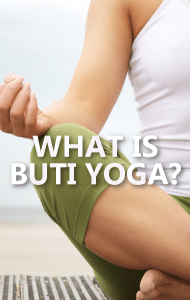 Dr. Oz talked to Bizzie Gold, founder of Buti Yoga, who showed him the incredible workout system that gave her amazing abs after having two babies. (mimagephotography / Shutterstock.com)

Bizzie said that traditional yoga can be “masculine”, static, and slow. Buti Yoga is cardio-intensive and blends flexibility with cardio strength.

Even though Bizzie had incredible abs, she’s also had two babies. Her physique and physicality is a testament to how well Buti Yoga works.

Bizzie Gold showed Dr. Oz and several audience members how to do Buti Yoga. They each had a yoga mat. They started with their legs spread out, with their feet on either side of the mat. Then, they spread their right toe to their right, and bent sideways to touch the right hand to the mat, and raising their left arm toward the ceiling.

Then, staying in that position, they started pulling their arm back, bending the elbow toward their waist. Then, they bent forward, touching their hands to the ground. Then they lifted their right leg up to the side. Bizzie said that they should channel their “inner animal”.

“This is supposed to be feminine yoga, I thought?” Dr. Oz said.

“Hey, women can be animals,” she said.

The rest of the moves looked really intricate and complicated. I’m not sure I could describe them accurately. But this definitely looked like an awesome workout.