You probably know that fast food is not an ideal daily diet, but to show you what is really going on in fast food kitchens, Dr Oz assembled a team of insiders to dish the dirt on his show. Let’s Get Real host Erica Wides, author Robyn O’Brien (“the Erin Brockovich of food”) and health commissioner Peter DeLucia shared their findings with Dr Oz’s audience, including antifreeze ingredients and beef additives all over the menu.

Dr Oz: What Fast Food Doesn’t Want You To Know

Robyn O’Brien, author of The Unhealthy Truth, pointed out that fast food menu items can contain as many as 50 ingredients, and with 25% of Americans eating fast food daily, that should be cause for alarm. She said fast food consumption has been linked to everything from asthma to eczema. 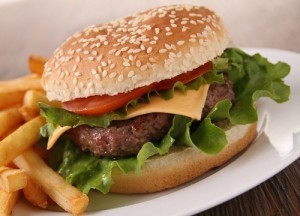 Doctor Oz wondered whether cutting corners is the problem, but Erica Wides said the fast food industry never had corners in the first place. They are watching the bottom line, and Americans are loath to spend much on food, preferring cheap options.

According to health inspector Peter DeLucia, the soda fountain and ice machine might be the dirtiest place in any fast food restaurant. That is because it is hard to clean, made up of many parts, and is often a breeding ground for mold and bacteria.

He went undercover to swab soda nozzles from some restaurants, like Subway. His findings were that the soda fountains were filthy. Getting a soda from behind the counter could be worse, if employees are not using the ice scoop or following proper procedures.

DeLucia said a case of Hepatitis A in Westchester County could have infected hundreds of customers. His advice was to be vigilant and look at the soda machine before using it. Soda buildup, discoloration, or employees putting their hands in the ice are all warning signs.

There may be antifreeze chemicals in some fast food menu items, according to Robyn. She said that propylene glycol, which is used in antifreeze, is also used to keep lettuce in tacos and salads fresh.

The audience seemed alarmed about this, but Dr Oz said he has heard that propylene glycol has not been proven to be harmful. “That’s not the same as saying that something is safe,” Robyn said. “We don’t know what the long-term impact will be” for children or pregnant women.

To demonstrate this principle in action, Doctor Oz showed two milkshakes. One was made using ice cream, milk, and vanilla extract. Another was made using as many as 16 ingredients in a milkshake, a typical procedure in fast food shakes.

“We really don’t know, when you combine all these together…we’re not going to ever know for sure if these all will be perfectly good for everybody,” Dr Oz said.

Have you seen perfect grill marks on your burger or chicken sandwich at a fast food restaurant? According to Erica Wides, those are fake. She said that no one is manning the grill in most cases.

Depending on how the product is marketed, the grill marks could come from a grill apparatus in the manufacturing process, or they could even be painted on using chemicals or dyes. Don’t even get her started on the smoke flavoring.

As an experienced chef, Erica said she also knows how to cook chicken without drying it out. Restaurants do this by adding extra fat to meals, which means your fast food chicken might not be so healthy after all.

“They’re putting a lot more on than you think,” she said, referring to butter for example. Dr Oz’s team surveyed 50 fast food workers, and more than 60% of them admitted they added butter to the chicken, which could add up to 70 extra calories and eight grams of fat.

Erica Wides said you can ask what’s being put in the food, but in fast food it’s harder to get substitutions. She said you can blot off the patty to soak up some of the excess fat before eating. Of course, the best solution is to eat at home, but that’s not always viable.

Robyn also added that there may be beef additives in everything from French fries to milkshakes at your local fast food restaurant. “That is the last thing that you would expect to be in a milkshake,” she said.

As for fries, Robyn said that fries take on the flavor of the oil it’s fried in. In the old days, that beef flavoring was in the oil. When restaurants switched to vegetable oil, they started adding in beef extract (sometimes known as “natural flavor”) to maintain the taste we had all gotten used to.

Robyn said the best thing you can do is be an informed consumer. You can read ingredient lists for your favorite fast food menus on their websites. Watch out for these, especially if you are a vegetarian: