Investigative reporter Christopher Leonard was able to infiltrate the chicken industry firsthand to see how the poultry is made, processed, and prepared and he shared several of his concerns with Dr. Oz.

Chickens are “bathed” in powerful chemicals, including Peracetic Acid and Liquid Chlorine to clean them of any bacteria or other germs. Dr. Oz explains that ingesting high amounts of either can cause damage to internal organs and increase a person’s risk for cancer, but the scary part is that Christopher Leonard says there is no way to know just how much of these harsh chemicals is left on the chickens after they are processed. He adds that chickens go through several chemical baths when being processed, so research needs to be done to determine just how much residue is being left behind and potentially putting a consumer’s health at risk. 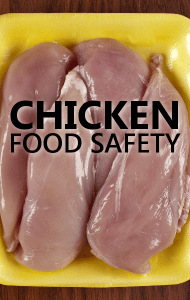 Dr Oz spoke to Christopher Leonard about what really goes on during the processing of factory chicken, including chemical “baths” and USDA inspections.

An added concern is that since so many chickens are being processed in a poultry plant and at a high rate of speed there is a lot of room for error. A recent study found there to be drug-resistant fecal bacteria on chicken meat that was tested at the grocery store, which is very worrisome to Leonard and to Dr. Oz.

Christopher Leonard’s findings concern Dr. Oz a great deal, especially since there is supposed to government oversight to protect consumers. Leonard explains that most of our food is monitored by the FDA, but the chicken industry is a little different because they fall under the USDA’s responsibility and even though they are overseeing slaughterhouses he believes they are often ultimately controlled by the meat companies. A bigger concern is that while meat companies, like Tyson, are ramping up chicken production they are requiring less inspectors to oversee their operation, which is definitely something to worry about if you eat chicken.

Christopher offers a few important tips to help consumers shop smarter and really know what they are getting when they purchase chicken at the grocery store.