Food industry whistleblower Phil Lempert went undercover to find out just how safe deli counters really are. Americans love the convenience of ready-to-eat meals from the deli counter, but when it comes to safety, those spots can often be high-risk. He wanted to go undercover to find out what was really going on, and just how many germs were really lurking behind the glass. 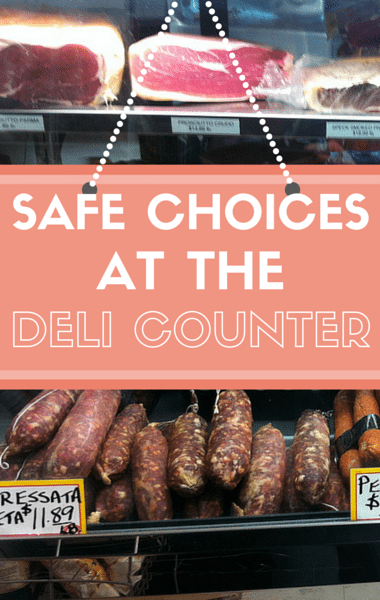 Dr Oz conducted an investigation into food safety at deli counters and how to make the healthiest food choices. (thefoodgroup / Flickr)

Phil began by looking behind the display cases. One red flag is when there aren’t barriers between the meat. At one deli, Phil immediately noticed three kinds of meat touching each other, potentially causing cross-contamination. That same display case also appeared pretty dirty, especially the shelves themselves. When Phil asked for a specific sliced meat, he was looking to see just how clean the slicing machines were. The meat he asked for was placed right on top of slivers of other meats that were left behind on the machine. The workers should also change gloves between each product, and clean the scale they use, but that particular deli didn’t do either of those things.

One of the workers also wore the same gloves as he sliced meat, dialed the phone, and then went back to slicing meat. Phil explained that one of the best indicators of a clean deli is how clean the workers’ aprons are. Phil said “If I was a health inspector, I would close this place down.”

Phil brought in a medical team to swab some spots in the deli, to find out just how dirty it really was. Surprisingly, no one even noticed them swabbing.

Phil then explained that stores are supposed to have food safety certification, which is why he always looks for the ServSafe logo typically posted where the health inspector posts their approval. You want to make sure everyone in the deli is doing their job to keep the place clean, in between every order.

As for what happened when Phil swabbed the deli, he found streptococcus viridans on the scale. When he swabbed the meat packaging paper, he found staphylococcus. Finally, when Phil tested the temperature of the prepared food in the deli case, it came out at 124 degrees, which is 20 degrees less than it should be. Hot foods should be a minimum of 140 degrees, and cold foods should be a maximum of 40 degrees.

But what about the actual meat? The deli meat business made $11 billion last year, and the average American eats deli meat or cold cuts twice a week. Processed meats are the most popular cold cuts of all. Phil began by stating that it’s simply false to say that all deli meats are bad for us. It’s about knowing what to look for in order to make the best choices.

Processed meats don’t look like they came from an animal and have uniform color and shape from edge to edge. Processed meats include bologna, salami, head cheese, olive loaf, turkey or chicken roll, sausage, and ham. They are made by grinding meat and mixing it in big batches, before being shaped into a specific form with preservatives. Nitrates are added for taste, to extend shelf life, and to prevent the growth of bacteria. The good news, is there are a lot of healthier alternatives.

The gold standard is the whole cut. If it looks like it came from an animal, it’s likely a lot less processed. He showed how a whole cut of meat can be shaved or sliced very thin, to add to a better-tasting sandwich. When shopping, look for only the name of the meat and spices on the ingredient label. Unfortunately, whole cuts cost a lot more than processed meat.

Dr Oz then wanted to share some tips for finding healthy and cheap options at the deli. He first suggested that when you buy meat from the deli, always start with the second slice to be sure you’re getting fresh meat. Next, ask the workers behind the counter to make your sandwich fresh, because it’s hard to tell how long sandwiches have been sitting behind the counter. If you’re going for a salad, always take from the bottom.