Approximately 20% of people who come down with an antibiotic-resistant bug, don’t pick it up in a hospital or from another person, but instead they actually get it from food! That’s because of the popular use of antibiotics in meat and poultry. Consumer Reports spent three full years studying supermarket super bugs. First, Dr Oz explained how the bugs get into the food in the first place.

Animals like cows, pigs, and chickens are routinely given antibiotics in their food and water to prevent disease and to promote faster growth. The bacteria are in the animal’s gut, and they react with the antibiotics and some are killed, but the few that survive become resistant super bugs. Once those super bugs are excreted in manure, it gets into the soil, water, and air, as well as farm workers who contaminate the meat as they process it. That meat is sold in supermarkets and sometimes contains super bugs that infect consumers. 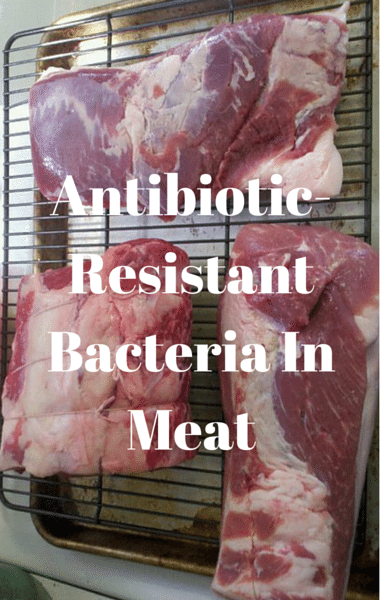 Dr Oz took a closer look at antibiotic-resistant bacteria found in meat and how you can find natural quality food. (quantumbutterfly / Flickr)

They found that 14% of beef had multi-drug resistant bacteria. In the conventional pool where they knew antibiotics were used, 18% of the samples had the resistant bacteria, compared to 9% in the no antibiotic pool. Twice as much! They found three times as much as grass-fed meat! Basically, the more sustainable the animals are raised and the healthier they are, the better off the meat is.

As for poultry, they found that 57% of the chickens had the multi-drug resistant bacteria. There was also still a difference between the conventional and no-antibiotic samples, and although they weren’t as drasticas they were for beef, there was still a difference.

In turkey, about 83% of the samples had super bugs in them, “which is astonishingly high.”

Dr Oz: What Is The FDA Doing About Antibiotics In Meat?

The government has taken “baby steps” by providing guidance to the industry that says they don’t want them to use antibiotics important in human medicine, for growth promotion. If the farmers want to use it for anything else, they need to get a vet’s prescription. It sounds great, but there are huge loopholes, because producers can still feed low levels of antibiotics to healthy animals, every day, and call it disease prevention.

When Dr Oz contacted the FDA, they said “The agency is moving to eliminate the use of such drugs for production purposes (I.E., growth promotion and feed efficiency.

Urvashi suggested that you shop for better beef, and know that if a meat product doesn’t have a label, it was likely produced from animals who were fed antibiotics. Look for the green and white USDA Organic label, as well as the red, white, and blue USDA Process Verified No Antibiotics label. There are also many companies who have pledged to avoid meat with antibiotics.

Dr Oz: What Does ‘Natural’ Mean On Food Labels?

Dr Oz then wanted to take the time to take a closer look at food labels. So what does “natural” really mean when it’s on a food label? The FDA doesn’t have a formal definition of natural, but considers it to mean nothing artificial or synthetic. Urvashi said “that is what they say but that is not what they do.” Consumers think that natural means no pesticides, no hormones, and no drugs on a daily basis. Consumer Reports found that 60% of consumers look for the term “natural” when they shop.

Urvashi said consumers are certainly being deceived which is why class action suits are being brought. The FDA denied the chance to define natural, which is why there’s a petition to crack down on the use of the word natural on food labels. Consumer Reports believe that natural should mean 100% organic or organic plus no artificial ingredients.

To be sure you’re getting a food product that came from the right conditions both for the animal and the worker, look for the green 100% organic label, the Certified Naturally Grown label, the Fair For Life orange label, the Food Justice Certified label, the Animal Welfare Approved label, and thn finally the Certified Humane Raised and Handled label. Those labels will guarantee you a quality product.