In one of the biggest scandals to rock the fast food industry, Subway, one of the largest fast food sandwich chains, came under fire when reports claimed their chicken sandwich contained just 50% chicken. Customers hoping to eat healthier at a fast food restaurant often go with chicken but recent reports have many wondering if they’re even eating chicken at all.

A Canadian news program, CBC Marketplace, selected six fast food sandwiches for independent DNA testing. Samples from McDonald’s, Wendy’s, A&W, and Tim Hortons came back at least 84% chicken DNA, which experts say is a normal given that the chicken also contains seasoning, breading, and binding. However, according to the study, one sample from Subway was just 53.6% chicken and the other was just 43%. If it’s not chicken, then what else is in there? 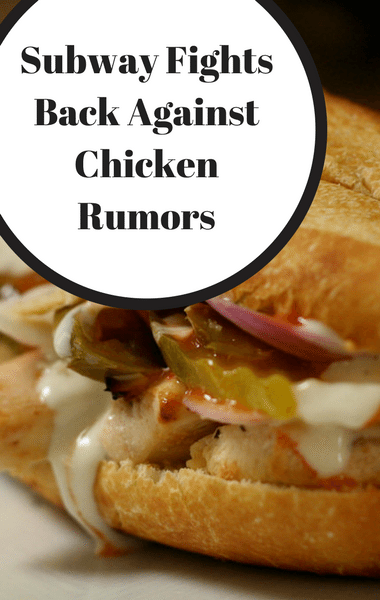 Dr Oz welcomed a representative from Subway to his show as he discussed rumors that their chicken was just 50% chicken. (ginnerobot / Flickr)

Subway has strongly contested the findings of that Canadian study, so naturally Dr Oz sent Larry Olmsted, author of “Real Food/Fake Food,” as well as a member of his medical unit, to collect and inspect samples of fast food chicken from the United States. The samples were then sent to a lab to be DNA tested.

Larry Olmsted joined Dr Oz and explained that the Canadian tests found soy, a cheap filler. Some fast food chicken, particularly those in shapes like nuggets or rings, is made from restructured chicken which is chicken that has been ground, sometimes with flavoring and fillers added, then molded back together to look like chicken.

But why would a fast food restaurant go to all the trouble of restructuring chicken instead of just serving it as it is?

What Is Restructured Chicken?

Larry Olmsted explained that by restructuring chicken, the restaurant can add more flavoring and it makes the product cheaper. It also allows fast food restaurants to offer consistency as well as uniform portion sizes for better accuracy in nutrition labeling.

To show one of the processes in which chicken in restructured, Larry took ground chicken and added ingredients like flavoring agents, emulsifiers, thickeners, preservatives, and water. The product can then be baked and grill marks are added afterward. It’s then sliced into pieces and served as chicken.

Larry then explained that DNA testing for food is essentially reverse-engineering a recipe to try to figure out what’s in it. As he explained it, DNA testing can tell you there’s something from a cow, but not specifically what it was that was used. Same with chicken.

Speaking of DNA testing, Dr Oz then wanted to give Subway a chance to speak out about the recent DNA testing results from the CBC.

Dave Theno, the Chief of Food Safety and Quality with Subway, explained that when he first saw the results of the experiment, he was shocked given what he knows. He said he was then disturbed by how it hurt the company, saying the results broke the bond of trust they have with consumers. He claimed that their company has been very transparent about what’s in their food and even display all their ingredients on their website. He said it was “100% false and wrong” that Subway’s chicken was 50% soy.

Dr Oz reached out to CBC and they wrote “The tests administered for CBC were done by independent and credible experts… And, worth noting, Subway has yet to provide any explanation for the DNA test results obtained by CBC. We believe our journalism to be sound and there is no evidence that we’ve seen that would lead us to change our position.”

Dr Oz: Subway Fights Back Against Reports Of Fake Chicken

To that statement, Dave responded “Like I said, if you’re going to test food products, test them in a certified food lab. People that know what they’re doing with foods. Don’t take them to a wildlife lab.”

He added that the lab may be great at what they normally do, but it’s not suitable for this kind of product and to do this kind of determination.

How Subway Makes Their Chicken

Dave also shared footage of how chicken is reconstructed in the Canadian lab that was tested by the CBC. In the video, chicken breasts were trimmed and inspected. Then the chicken is brought out of a hopper and flattened onto a belt where it is mixed with spices and less than 1% soy. The process allows the chicken to be cooked uniformly.