Are you making major mistakes when it comes to the food you eat? Dr Oz made it his mission to bust 99 of the biggest food myths you should stop believing right now. These myths are actually costing you time, money, and even extra calories. To help him, Dr Oz welcomed food journalist for “Gourmet” magazine and The History Channel Ian Knauer, from America’s Test Kitchen Dan Souza, and Dr Oz’s go-to tester Rhenotha.

Dr Oz: Does Searing A Steak Seal In The Juices?

The first myth Dr Oz wanted to tackle was that searing meat locks seals in the juices. For that, he turned to Ian. Ian first took two steaks that weighed the exact same. He seared one and finished it in the oven, then started one in the oven and seared it afterward. He then weighed both steaks to see how much of that liquid was lost in each of the steaks. It turns out there was just a minor difference. 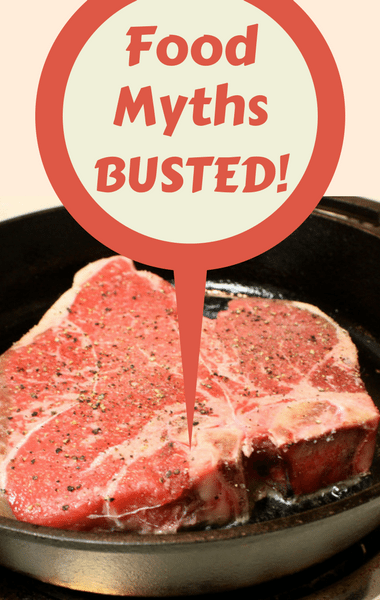 Dr Oz tackled several food myths to reveal the truth, including the proper way to cook a steak and whether you should wash your mushrooms before cooking them. (naotakem / Flickr)

Ian explained that when you sear a steak, you’re actually taking a couple amino acids and multiplying them with something called the Maillard effect. You’re not actually creating a crust that seals the juices in. He further explained that one of the advantages to searing first is that you get those flavorful juices in the pan that you can make a nice pan sauce out of. As for when you should sear the steak, it just comes down to personal preference.

What about cutting the meat?

Dr Oz: Should You Stop Cutting Meat On A Wood Board?

Dr Oz admitted that he would always tell his kids not to cut meat on a wooden cutting board because all the cracks and crevices can be full of trapped bacteria. Ian explained that while food particles and juices can get into those cracks, they actually seep down into the board and end up not being an issue as long as you thoroughly clean the surface of your cutting board.

Dr Oz: Should You Clean Mushrooms?

Next, Dr Oz turned to Dan Souza, explaining that he grew up in Delaware, next to Kennett Square, Pennsylvania, which is know as the “mushroom capital of the world.” Dr Oz was taught early on that he should wash his mushrooms because of the dirt around them, but it turns out no one else is doing that. Dan explained that mushrooms actually grow in a sterile environment, but that dirt may not exactly be pleasant to eat. To get rid of that, you can brush or wipe of the dirt individually, or you can dump them all into a colander and run them under water.

Dr Oz: How To Clean Mushrooms

A lot of people are worried they will absorb the moisture and become soggy when you cook them. So to find out, Dan tried both methods of cleaning mushrooms and then cooked them afterward to see if there would be a difference. Dr Oz tried them both and admitted they tasted the same and he couldn’t tell a difference.

As Dan explained, they cooked in the same amount of time as well, which means it doesn’t matter how you wash them. It’s perfectly find to rinse them if you want to.

Dr Oz: Does Cooking Evaporate Alcohol In A Recipe?

Dr Oz then wanted to take on the myth that cooking evaporates all the alcohol you add to a recipe so that none of it gets into your bloodstream. For his experiment, Dan made a pot of Beef Burgundy which has a pretty good amount of red wine in it. They cooked it for three hours and after one hour, only a little bit of the red wine had been cooked off. After three hours, about 60% of the alcohol had been cooked off, which means you still have 40% of the original alcohol content in the dish.

However, it still depends on what you’re cooking. If you had an open pot with just broth and wine, you’re going to lose more alcohol. But if you add it to a stew with potatoes, carrots, and other ingredients that absorb liquid, you’re going to retain even more alcohol. If you want to get rid of all the alcohol, you have to get rid of all the water. If you cook the sauce all the way until it’s almost dry, you can get rid of most of the alcohol, but most of the time, you’re still going to have some alcohol in there.

Next, can your microwave oven actually kill you?

YouTube star Nick Uhas was ready to set the record straight on whether your microwave oven could potentially kill you. Microwave ovens work on principle known as dielectric heating. Dipoles are like tiny electric magnets that can be influenced by electromagnetic radiation, specifically radiation in the microwave range. A microwave uses high-powered electromagnetic fields contained inside a metal cooking chamber. Those little holes in the microwave glass are actually a wave guide tuned to trap the radiation to let visible light pass through. That way you can see your dinner as it cooks, without harming you. Therefor, your microwave cannot kill you with radiation.

You can learn more about the science that goes on in your kitchen by reading “Cook’s Science.”