Dr Oz: Is Pork Really Good For You?

Cheaper is certainly better, for the most part. But as part of a Food Truth investigation, Dr Oz wanted to find out if we could be putting our health at risk by consuming too much of “the other white meat.”

Pork’s popularity is on the rise and there are more ways to enjoy pork now than ever before. Americans eat almost 50 pounds of pork per person each year, but what has happened to the pork reaching consumers?

Investigative reporter Mark Schatzker explained that right now, the price for pork is low. Pork is the most consumed meat in the world, partly due to how cheap it is. 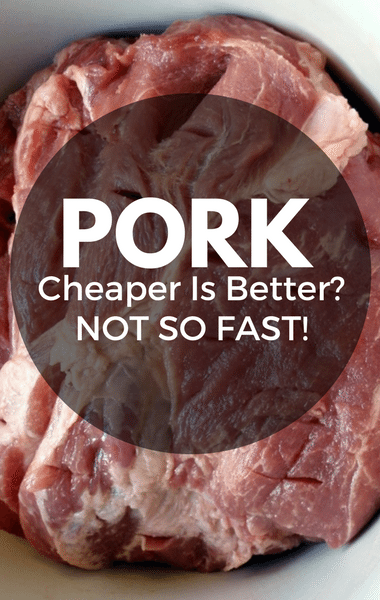 Pork is cheaper than ever, but what’s causing the price drop and what does it mean for our health? Plus, how to shop for the right cuts of pork. (jocosity / Flickr)

Mark explained that pork today has 50% less fat than it did in the 1950’s. Fat is the most expensive part of the animal to produce. Factory farms are also responsible for cheaper products.

Mark continued to explain that you may think removing the fat in pork is a good thing, but it’s not that simple. Because a lot of flavor and moisture disappears when the fat is removed, the pork industry has turned to a mixture of salt, sodium phosphate, and water to make up for it.

Sodium phosphate is deemed safe by the FDA but it’s typically added to medicine for constipation and is also found in detergents. Essentially, it’s a chemical and that means you’re paying for water.

If you want more flavor and moisture in your pork, do it yourself by mixing salt with sugar and water to make a brine. Allow the pork to brine for an hour before cooking it.

When buying pork at the store, look for an ingredient list that has only one item: pork. You can also look for “no antibiotics added” on the label as well as “free range.”

But how do you know what cuts of pork to look for when shopping for pork? According to Mark, Americans are pretty boring with their pork cut selections. When Americans think of pork, they typically go with bacon or pork chops.

As for cooking with pork, Dr Oz brought in Rocco DiSpirito to share one of his favorite one-pan pork dinners that you’ll want to make for dinner tonight. You can find that tasty recipe on the next page.