Do you really know what you’re buying and eating? Larry Olmstead wrote an entire book about counterfeit foods and scams called “Real Food/Fake Food” and Dr Oz was ready to dedicate an entire segment of his show to the three most popular counterfeit foods. First, your favorite fish could potentially be a fraud. Larry spoke to a chef in New York City, explaining that reports claim as much as 2/3 salmon in restaurants is misrepresented.

The chef explained that the problem is likely that restaurant owners have become greedy. For example, some may label their salmon as “wild” when in fact, it’s actually farmed, and will charge the customer more. Larry is a food critic and even he couldn’t tell the difference between the two kinds of salmon. 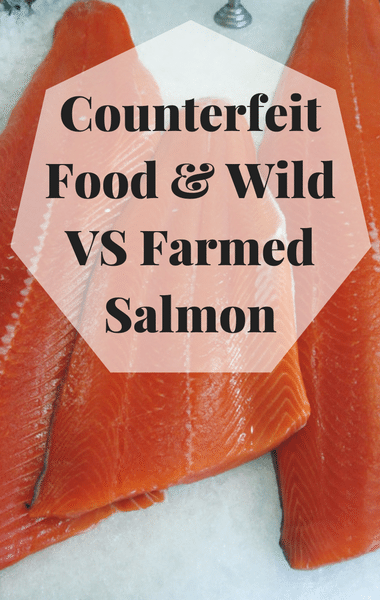 Do you know the real difference between wild and farmed salmon? How can you be sure you’re buying the healthiest fish at reasonable price? (randychiu / Flickr)

Salmon farming is a problem in that it’s hard to replicate salmon’s natural environment in a farm. Farmers end up having to use a lot of antibiotics, pesticides, and vaccines because of overcrowding. Wild salmon are carnivorous and get their pink color naturally, while farmed salmon eat manufactured pellets with chemicals to create the color. Wild salmon also tends to be leaner, with less fat.

Wild versus farmed salmon is similar to grass-fed versus grain-fed beef. If you believe that the diet intended by nature is better all around, it’s clear that wild is the better option. Similarly, it’s been shown that the antibiotics used on animals can show up in the food we eat. The good news is that farmed salmon contains the same amount of omega-3’s as wild salmon, if not more, because it’s built into their feed.

When Larry visited a salmon farm, he discovered a high-tech warehouse, the Freshwater Institute. A recirculating agriculture system is used to recycle more than 99% of the water used, allowing them to raise fish in a controlled environment with clean water. That means they don’t have to use pesticides or antibiotics, ever! It takes two years to farm-raise salmon, and they’re sold at market once they reach 10 pounds. Consumers claim their salmon tastes delicious and it’s certainly cheaper than Alaskan wild-caught salmon.

The unfortunate truth is that most salmon isn’t farmed that way. Instead, most salmon is farmed in cages in the ocean. To ward off disease in the overcrowded cages, the fish are fed antibiotics which means those chemicals and the fish waste are released into the ocean. Those toxic materials can then spread disease to whatever wild fish swim past the cages.

To be sure you’re getting the best, healthiest fish at a reasonable cost, it’s first important to understand how to read labels. Larry suggested you look for the name of a farm on the label. All Atlantic salmon is farmed, so even if it says “fresh Atlantic salmon” it’s still farmed. If you see “organic” or “hormone-free” on the label, it’s just a way to try to get you to pay more. Hormones aren’t allowed to be used in agriculture in the United States so all farmed salmon is hormone-free.

But what about canned salmon? Larry explained that canned salmon with the Alaska seal is actually a great, budget-friendly option for those who want to take advantage of the health benefits without emptying their wallet.

Some great examples of farmed seafood that’s okay for you to eat include oysters, clams, and mussels, as well as catfish, striped bass, and rainbow trout. Farmed trout actually has more omega-3’s than salmon! The Seafood Watch app helps you identify responsibly-labeled fish near you as well as loads of other information.

While on the topic of counterfeit foods, Dr Oz wanted to take a look back at Parmesan cheese and extra-virgin olive oil. Larry Olmstead claimed that producers of extra-virgin olive oil have been making strides to “protect the integrity of their product.” Italian and California producers have both created quality seals that help consumers spot authentic olive oil in the grocery store. Olive oil from Tunisia, Chile, and Australia also tends to be good quality.