Dr Oz played a game called Foods That Burn Extra Calories.  300 calories is not just 300 calories, it turns out that it does matter where the 300 calories come from.  The same number of calories from carrots vs from cotton candy are just not the same.  Doctor Oz gave a list of smart foods that burn extra calories and help you lose weight including tuna steak, coffee and black beans.

Dr Oz was shown a word and had to get his guest to guess the word without using certain words.  The word was Tuna Steak 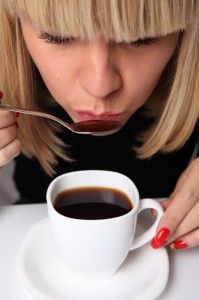 but he could not say fish, sushi or smells.  The lady guessed the word and won a year’s supply of tuna steak.  Dr Oz said that Tuna Steak is a chewy food, which makes you burn 20% more calories just by chewing.

Dr Oz’s next word was coffee, but he could not use the words morning, bean, mug or tea.  I thought the best clue he could have said would have been Starbucks, but I guess he did not think of that one!  Doctor Oz said that coffee has caffeine and burns 16% more calories by revving up your metabolism.  Light roast is the best because it has more caffeine than dark roast.  You should drink coffee within 2 hours of your biggest meal (which should be breakfast or lunch in case you forgot!).

Dr Oz’s final word was black beans, but he could not use the word kidney, string or chickpea.  I would have said the little dark things that Chipotle puts in their burritos!  I would be great at this game, don’t you think?  Anyway, Dr Oz said that black beans contain protein and that your body spends lots of time converting proteins so you burn more calories.