Dr. Oz loves procedurals, so he talked to forensic pathologist Dr. Judy Melinek about her work. She works every day with the dead. She’s a medical detective who does autopsies in order to find out why people die. Monday is the busiest day in the morgue, because bodies are brought in over the weekend and put on refrigeration. Deaths that are sudden, unexpected, or violent predominate.

Dr. Melinek said her father was a physician and it was his anatomy books that fascinated her as a girl. In pathology, she sees the body better than any other doctor. 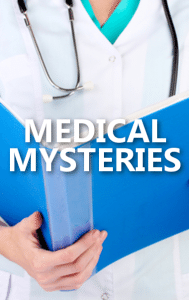 Dr. Oz talked to forensic pathologist Dr. Judy Melinek about her work performing autopsies and what dead bodies can tell us about our health. (Africa Studio / Shutterstock.com)

Dr. Melinek brought with her the organs of a recently deceased individual to show us the process she goes through as a medical examiner. The woman was in her 50s, she was overweight, and she was also a smoker. She came into the hospital after her family found her collapsed at home. She was unresponsive and died at the hospital.

Dr. Oz: Looking at the Heart

Dr. Melinek said that one of the first things she looks at in the body during the autopsy is the heart. This is because so many people in this country die of cardiovascular disease. The heart should be roughly the size of your fist, but this woman’s heart was enlarged, about twice that size. This happens, among other things, because of high blood pressure.

The kidneys in this woman were also damaged by high blood pressure. Her kidneys were a lot smaller than they should have been. They had a granular texture to them as well.

This patient has emphysema, which is damage to the lungs, due to her smoking. Emphysema is characterized by a blackened appearance and tiny holes in the organ. The color is from the tar in the cigarettes. Even though this patient’s lungs were in such bad shape, they weren’t the cause of death, although Dr. Melinek said they could have been someday if something else hadn’t happened.

Dr. Oz: Bleeding in the Brain

Dr. Melinek then moved onto the brain. This woman’s brain had bleeding in the brain, which is a sign of stroke. This is a sign that she had high blood pressure in the blood vessels of her brain that caused her to collapse suddenly at home. That was the cause of death: a stroke.

Dr. Oz asked Dr. Melinek if she’d ever been wrong about a diagnosis. Dr. Melinek said she’d made mistakes, but typically they catch them afterwards, such as when additional information comes out. In her book Working Stiff, she talks about a woman who was found at the bottom of the stairs and they thought initially she’d simply fallen down the stairs. But her family asked her to take another look because her husband was the one who found her and he’s not supposed to be in the apartment, because he didn’t have the keys.

The next day, she examined the body. During the autopsy, the blood drains down the table, so bruises that weren’t visible the first day were now visible the second day. She had marks on her arms from where her husband had grabbed her. When Dr. Oz said he must’ve killed her, Dr. Melinek said she didn’t want to conclude that. Dr. Oz clarified: someone grabbed her and she died soon after. That’s what the evidence says.

Dr. Oz said autopsies can provide a lot of comfort to a family and Dr. Melinek said they can provide answers for the family.