The First Lady of NASCAR, Danica Patrick, came by Dr. Oz to talk about her mission to encourage good dental health in America. She said she’s a huge fan of the show and she was happy to come on the show.

Dr. Oz showed a picture of Danica doing a handstand. Danica said that exercises like this help her race, because it’s important to have strength, flexibility and endurance in a race car. If there’s an impact, you want to be able to bend and not break. Danica also said exercise helps her brain, because it tests her limits and lets her realize her strengths. 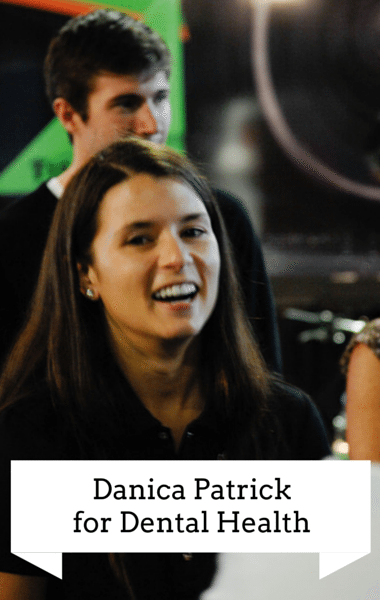 Dr. Oz talked to Danica Patrick about her mission to encourage people to get serious about their dental health. (thebusybrain / flickr)

Danica said when she’s racing, she’s focused. She’s concentrated on the car, what it needs, and the traffic all around her.

Then she joked this means she does 38 marathons a year, because of all the racing she does.

Dr. Oz: What If You Have to Pee During a Race?

Dr. Oz wondered what you do if you have to pee during a race. Danica Patrick said that you can go in the car, but she doesn’t, because it’s uncomfortable.

“There are some that do, I think. Yeah. But it’s kind of…I just, I got to sit back in that seat again and I don’t really want to sit in urine,” she joked.

Dr. Oz said that he has a problem with road rage and Danica Patrick admitted she has road rage, too. She said she had an “infinite amount of road rage.” She said sometimes she wants to “teach everyone just a little lesson” on the road. She said sometimes, she’ll cut off the people who go the speed limit in the left lane.

In an effort to encourage dental health, Danica Patrick set up a hidden camera experiment where she pretended to work in a food truck. Whatever the people ordered, she immediately put it in a blender and blended up. She said this was to show them what the future looks like if they don’t take care of their mouth.

This seemed pointlessly mean to me, because many of the people were shocked. I mean, they’re just trying to get some fish tacos. They didn’t ask for a NASCAR racer to lecture them on dental health. But it was for a good cause, so maybe the video will encourage people to take care of their teeth.

Danica said she occasionally asked people if they wanted their food chunky or smooth before blending and some people actually answered, “Chunky.” Also, in the video, some people drank the resulting concoction. Why would they do that? I have no idea. But there’s no way it tasted good.

Danica Patrick is working with Aspen Dental for this mission. She said Aspen Dental really wanted to help people and was doing great work for dental health in America. They have a Mouth Mobile, which is a dental office on wheels. They also gave over $1 million in free oral care last year. She also said over 150 million people didn’t go to the dentist last year and 1 in 5 people would rather fix their car than pain in their mouth.

She urged people to take care of dental situations before they become an emergency.

Dr. Oz then challenged Danica Patrick to a race. He said he was good at running and she was good at driving, so he combined them. He challenged her to a Razor scooter race. Both of them took their shoes off for it.

Dr. Oz was in the lead for most of the time, but Danica Patrick ultimately won.