Dr. Oz kicked off his show today by talking about whether or not e-cigarettes are dangerous. E-cigarettes have been touted as smoke-free alternatives to cigarettes. But now the FDA and the World Health Organization is becoming concerned. Sales of regular cigarettes have been declining for the past five years. This has led to a new vehicle to get your nicotine fix: e-cigarettes. Jenny McCarthy has even been a spokesperson for them.

Dr Oz discussed E-cigarettes and the danger liquid nicotine poses, especially to children, and whether secondhand vapor poses a danger to the public health.

E-cigarettes have grown into a $3 billion industry worldwide with over 450 brands worldwide. But new studies are warning that e-cigarettes may produce carcinogens, including formaldehyde. The industry has also come under fire for targeting teens with fruity and candy-like flavors. Now, the FDA and Congress are coming together to regulate ingredients and distribution. 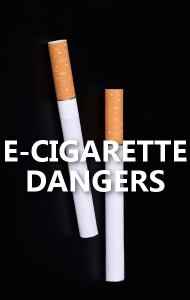 Dr Oz discussed E-cigarettes and the danger liquid nicotine poses, especially to children. He also discussed whether secondhand vapor poses a danger to the public health.

Dr. Oz welcomed expert Dr. Natalie Azar, who explained that while e-cigarettes don’t have tobacco, they do have liquid nicotine. The issues is also what sort of other additives are in there. There are fewer additives in e-cigarettes than regular cigarettes, but we don’t know how many they have or what they have in there. They work by heating up the liquid, vaporizing it, and inhaling into the lungs.

E-cigarettes have only been around for a decade, That’s not enough time to study them for safety. There has been one study which looked at lung physiology after using e-cigarettes. They found high levels of inflammation. With long term use, this could mean damage to the lungs. It may not be cancer, but it’s certainly concerning. The worst part is we might not fully understand the issues surrounding e-cigarettes for a long time.

Dr. Azar also wondered what happens if a child tampers with the e-cigarette and swallows it. One teaspoon of liquid nicotine can actually kill a small child. Over the last few years, there’s been a 200 percent rise in calls to poison control centers, predominantly for children under the age of five.

Dr. Oz: What are E-Cigarettes?

Dr. Oz explained that the vaporizer and the cartridge of the e-cigarette are two separate devices. The cartridge is where things get troublesome. That’s where the liquid nicotine is and where any flavoring or additives might be. The most common chemical found in there is a solvent called propylene glycol. This chemical helps vaporize the nicotine and travels into the lungs. Dr. Oz said there’s a problem because not only does the vapor go into the smoker’s lungs, it also goes into the air. This vapor has been proven to have formaldehyde and other heavy metals and toxins. These vapors can affect other people. Secondhand vapor can be hard to detect and therefore hard to know whether you’re at risk. Secondhand smoke is easily detected by anyone. But secondhand vapor is an issue.

Dr. Azar said we need to standardize these devices, They need to regulate the amount of nicotine, the concentration, and the purity of it. They also need to get the people who make these products to disclose what’s in their product. They also need to make it child- and tamper-proof. Currently, the industry is completely unregulated. She also cautioned that e-cigarettes contain just as much or more nicotine as regular cigarettes.

As an ex-smoker who tried e-cigarettes, I just have to say another danger is that only three to four puffs of an e-cigarette equals the amount of nicotine found in a regular cigarette. This makes it extremely dangerous if you don’t read the label or if your inhibitions are lowered due to alcohol. You’ll keep puffing away and have no idea that what “feels” like a regular cigarette is really something like three to five cigarettes.

Dr. Oz: Are E-Cigarettes a Safe Alternative to Cigarettes?

Dr. Oz also had an addiction specialist who has spent more than a decade of her life studying nicotine and its effect on addiction, Dr. Andrea King. She said e-cigarettes are not a good way to quit smoking. She doesn’t recommend them to her patients because of the lack of scientific evidence. Companies aren’t interested in getting standardized and approved. She said a study showed that when a smoker sees someone smoking an e-cigarette, it makes them want to smoke the real thing. Therefore, it perpetuates this cycle.

Dr. Oz reached out for a statement from the Smoke-Free Alternatives Trade Association, who said that recent studies “confirm that there is no comparable risk between tobacco smoke and vapor when it some to serious adverse health effects and that there is no so-called secondhand vapor from vaporizers and therefore vaporizers pose no discernible risk to the public health.”

Dr. King said she felt this was false. There is a risk from secondhand vapor and it contains harmful heavy metals, nicotine, and other chemicals. Dr. Oz ended the segment by showing the actual sign from his wall, which warns people that there is no smoking in his audience, including e-cigarettes.