Today was Dr. Oz’s special Halloween episode! To mark the occasion, Dr. Oz talked to a woman named Jolanda who has been eating her own earwax since she was three years old. She said whenever her finger goes in her ear, she has to put it in her mouth. Is this normal or nuts?

The audience and Dr. Oz agreed this was nuts. Dr. Oz reached out to audiologist Dr. Craig Kasper, who said this was the first time he’s ever heard of this. He said there’s no harm in her eating it, but there is a concern about her digging in her ear canal to get the wax. This could harm not only the ear canal, but the ear drum itself. 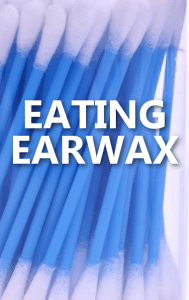 Dr. Oz talked on his show today about weird health questions, including a mother and daughter who wondered about their webbed toes.

Dr. Oz had a gross demonstration where he and Jolanda put on gloves and pulled ear wax out of a giant ear. This showed that she was pushing her ear wax against the drum and scraping the walls of the canal. Jolanda said she was considering stopping after seeing this.

Then Dr. Oz went over to Janelle, who has an extra body part. When she was pregnant with her child, she felt a hard lump in her arm put Fearing it was breast cancer, she went to the experts and found out she had an extra mammary gland in her armpit. So essentially, she had a third breast. Janelle said it was a “kiwi-sized lump.” Is this normal or nuts?

Dr. Oz said this was normal. He also said this was fairly common. Women have milk lines going from their armpits down to their pelvis. Milk may only come from the nipple, but it’s possible for women to develop the beginning of another breast along these lines. If you look along the milk lines, you might find an extra freckle. This freckle may have been the beginning of a breast. Sometimes it may grow and sometimes it may not.

This is a fairly common problem, but it’s not worrisome because they’re benign. Doctors don’t worry about them unless they change in a meaningful way, like if they grow or get a rash or form a harder lump. Otherwise, it’s no big deal.

Then Dr. Oz talked to a mother-daughter duo, Donna and Brittany. They have webbed toes. Is that normal or nuts? It turned out this was normal. Dr. Oz said that when a baby is being developed in the uterus, hands stand out as paddles. Then, slowly, fingers separate. But sometimes, fingers or toes don’t separate fully, resulting in webbed toes or fingers. There’s no medical danger in this, although you can get surgery to fix it if you want.

Dr. Oz wondered if they swim better or if there are advantages. Donna and Brittany said when they get pedicures, it’s always interesting when they try to put the toe dividers between their toes.

Dr. Oz got surprised when The Count from Sesame Street came by with his own normal or nuts health question. He said he loved counting so much, that when he counted sheep at night to help him get to sleep, it made him too excited to sleep and he ended up staying up all night. The audience said this was nuts, but Dr. Oz said he couldn’t call the Count nuts. He told him to keep counting all he wanted, because eventually he would get tired.