The food court is a popular spot for many to eat, which is why Dr Oz wanted to take a closer look inside American food courts to find out if it’s a breeding ground for germs. He sent health inspector Peter Delucia to one mall to uncover some dirty little secrets. Peter first began his investigation at the back alley, which is a shared space for all the food court restaurants.

What Peter was looking for in particular were vermin. He found rat traps and vermin droppings everywhere, and upon walking out into the food court, he found several birds which can spread disease. He then wanted to check if food was being served at unsafe temperatures, using a laser thermometer. Hot foods should be kept at at least 140 degrees, or else bacteria can start to grow. One restaurant served him food at 88 degrees. Cold food should be kept at 40 degrees or lower, and he found violations there as well. 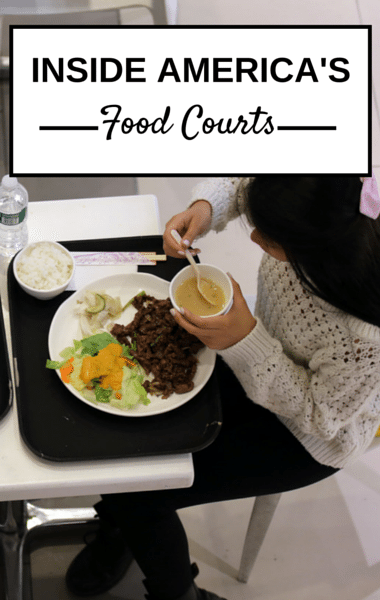 Dr Oz sent a health inspector to a mall food court to uncover some of the disgusting secrets you should know about. (llstalteri / Flickr)

Peter also kept an eye out for improper cleaning of the food court and spotted a worker wiping down tables. What most don’t realize, but Peter did, is that the cloth that was used to clean never touched any form of sanitizing solution. All the worker was doing was spreading germs from one table to the next. Peter swabbed what appeared to be clean tables and trays, and waited until he sat down with Dr Oz to reveal the results.

Peter explained that each restaurant at a food court has a very limited amount of space, which often causes them to cut corners. Not to mention, they get a lot more people eating there than a regular restaurant. The local health department is supposed to keep up with restaurants to be sure there are no violations. People that eat at food courts don’t truly think about what they’re eating and how long it’s been sitting there, as well as how clean the tables they’re using are.

Peter then shared that when he swabbed the tables and trays, even the ones that were supposedly just cleaned, he found fungus, staph bacteria, and fecal bacteria on almost all of the samples. What’s scary is that viruses like norovirus can last for months on an unclean surface, which means consumers are truly at risk.

Instead of using one of the trays at the food court, ask for your food in a take out bag or box.

Peter also looked at the soda machines because they’re hard to clean. Plus, it’s a moist environment that is a breeding ground for mold and bacteria, and that’s just the front of the machine! Peter then added that ice is a food, and in the food court when restaurants want to get your drink to you quickly, they will often just reach into the ice with the cup to serve you your drink, which can cause contamination of the ice and your drink. Ice can even preserve bacteria.

If the soda machine looks dirty or you’re unsure about the place’s cleanliness, play it safe by ordering a bottled soda.

Next, Peter shared how you can protect yourself from bacteria when eating at the food court. Since you likely won’t have a thermometer with you, use your own hand to check the display case for temperature. Put your hand up against the glass at a salad bar and see if it feels cold and is working. You can do the same for a hot buffet, but be careful to avoid burning yourself.

Peter also suggested you ask for the food from the bottom because it is less likely to have been touched by germs and most likely to be the right temperature.

You also want to select the restaurant with the longest line. Peter explained that if a restaurant is busy, there’s a lot more turnover which means a fresher product. When Peter visited the mall food court, he went to a Chinese buffet to see how long the food would actually be sitting there. The staff didn’t stir it and never took it back to reheat it.

The one advantage to a food court is choices. You can sometimes even see the people cooking your food, so pay attention to how clean the environment and the workers are. Choose wisely!