Does an Apple a Day Keep the Doctor Away?

Dr. Oz has been busting diet and health myths with revelations that have been surprising and some even shocking. Among his Five Diets Myths Busted, was one that asked if drinking more water will help you lose weight and another that offers the notion that we will inevitably gain weight as we get older. Along with the diet myths, Doctor Oz also had some health myths to share, some of which he and his medical colleagues admit to believing as well. Do you think it is a myth or the truth that women who are close friends will have synchronized periods? Dr. Oz says he learned that very myth in medical school, but now says that research shows results that may surprise you.

Is the 5 Second Rule a Myth or True?

As Dr. Oz continues to share some shocking health myths that many doctors even believe, the next one is something everyone in my family thinks is true. Do you think if you pick food up from the floor within 5 seconds, it is ok to eat? Well, Dr. Jeanine Downie bravely admits that she absolutely believes this myth to be true. She says her Mom was a doctor and they always followed the 5 second rule in their household, with the mantra, God made dirt and dirt don’t hurt. She goes on to explain that she will pick up food that she has dropped pretty much anywhere, but she draws the line at the bathroom, saying that is one place she won’t pick up food that she has dropped and put it into her mouth. Dr. Oz is concerned about the 5 Second rule because it only takes some bacteria, like Salmonella, 1 second to get onto your food. He says the key is to know how clean or dirty a surface is before you are willing to pick up dropped food from that surface and put it into your mouth. After testing several surfaces in Dr. Downie’s office, Dr. Oz shared the shocking results with her. She was stunned to hear that her computer keyboard, where she sometimes drops and picks up food, was filthier than her bathroom floor. Dr. Oz says the bottom line is that the 5 Second Rule is a myth and can even be dangerous or fatal, so it is best to not eat something once you drop it on any surface.

If You Sit Too Close to the TV, Will You Lose Your Eyesight?

Another of Dr. Oz’s most shocking health myths is one that many of you have probably heard many times, especially when we were kids. How many times have you repeated this to your own children? If you sit too close to the TV, you will lose your eyesight is one that Dr. Oz says he believed as a child and always worried he might go blind because of it, but he is here to tell you that it is a total myth. He says it has nothing to do with how close you sit to a screen, but that the amount of time is what matters. If you sit too long it can cause a strain on your eyes because you actually blink less when staring at the TV or a computer screen, which makes them dry, but in the long run this doesn’t do any real damage. Dr. Oz says that you have really strong muscles around the eye that are always being strained and pulled, but since there are several of them working together, they will never suffer any long term effect. He does say, however, that they like to be relaxed, so it is important to build in break times for your eyes throughout the day. 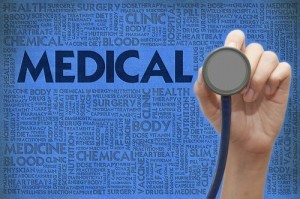 Dr. Oz says to practice his 20-20-20 Rule when working at a computer screen. It is simply to stop every 20 minutes, look at something 20 feet away, and blink constantly for 20 seconds.

When you are working at a computer screen, Dr. Oz says to follow his 20-20-20 Rule to take care of your eyes and avoid over straining them.

We all have a junk drawer in our homes, right? Some of us may even have one or more drawers that accumulates junk, but the task of going through and organizing those drawers can seem daunting, so it is often just easier to shut it so that nobody has to look at the mess inside. What if there were a few items in that drawer of junk that could offer a purpose?

Which one of the following from Dr Oz’s Pop Quiz is true?

Okay, I don’t know about you, but I’m pretty confident I know which one of these is actually true and I’m please to see that I’m correct because Dr. Oz says that it is true that an apple a day will keep the doctor away. He says that eating apples can reduce your risk for asthma, cancer, and heart disease.