Dr. Oz talked to Matthew Reeve, son of actor Christopher Reeve, who helped discover a huge breakthrough in the treatment of spinal cord injuries. He only wishes his dad was here to see it.

Dr. Oz also revealed the story of three men who were paralyzed from the neck down. One man was in his driveway, another was leaving the gym, and still another was out practicing, when they all had accidents that injured their spine. These accidents were very sudden and changed their lives forever. 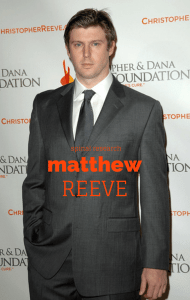 They all were told they would have to sit in a chair for the rest of their lives, unable to move, and that they would never walk again. Their bodies couldn’t regulate their body temperature. They had no bowel or bladder function. And they couldn’t be intimate ever again.

“The realization of understanding that you’re never going to move anything or feel anything again, it’s like your world is ending. It hits you. It hits you hard,” one of the men said.

But amazingly, a new treatment has been developed that will reverse these conditions that used to be permanent. It’s called an Epidural Stimulator and it’s placed on the top of the spinal cord on the back. It sends generalized electrical signals to the spinal cord, reminding the spinal cord of its potential. It changes those networks so a tiny signal from the brain can be sent throughout the body to move a toe or ankle or finger or hand.

The men all had tried to move their bodies before in therapy, but nothing had ever happened. One of the men had 80 sessions of rehabilitation and had no changes before getting this new treatment.

Amazingly, all of the men said they were able to accomplish incredible things with the Epidural Stimulator. One of the men first stood on day three of having the stimulator on, when even with the stimulator they expected him to be incapable of that for at least two years. Another man said it was crazy because he’d tried to move his leg a number of times and nothing ever happened. But with this, something finally did.

“Something like this can change the world,” said one of the men.

Matthew Reeve and one of the paralyzed men, Rob Summers, came by Dr. Oz to talk about it. Matthew Reeve is on the Board of Directors for the Christopher & Dana Reeve Foundation, where the Epidural Stimulator was developed.

Rob Summers said this was one of the best feelings in his whole life when he first was able to move. Matthew Reeve said he wanted people to know there are 6 million Americans out there with disabilities that limit their ability to walk.

“It is no longer a question of if there will be effective treatments. It’s a question of how quickly we can get them to those who need it,” Mathew Reeve said.