Dr. Oz: Melissa Rivers Speaks Out About Her Mother

In September 2014, the world was stunned when legendary comedian Joan Rivers tragically passed away at 81 after a minor throat procedure at a New York City outpatient clinic. Now, her daughter Melissa Rivers is speaking out about her mother’s sudden death. 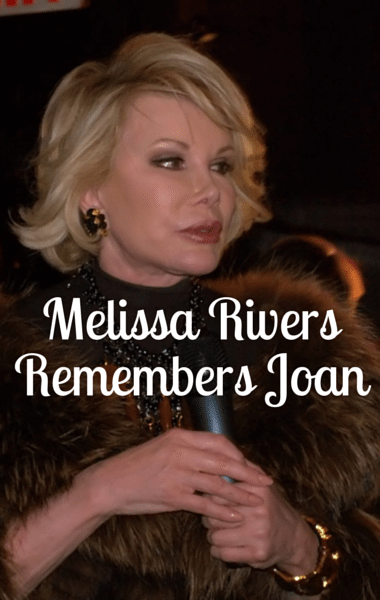 Dr. Oz talked to Melissa Rivers about the death of her mother Joan Rivers and how she’s coping with the loss. (shankbone / flickr)

Melissa Rivers has opened up about her mother in a new book called The Book of Joan and she wanted to talk about it with Dr. Oz.

Dr. Oz joined Melissa in her home to talk about her relationship with her mother, her father’s suicide, and how she and her son Cooper are coping.

Melissa Rivers said that she thought she would be able to cope with her mother’s death, since she’d lost her father. But she said that, “Losing your first parent is a comma. Losing your second parent is a period.” The first is a shift, the other is an end.

She also said when she lost her father, she didn’t have a child. Cooper and Joan were very close as well, which makes it hard for him.

Melissa said she spoke to her mother the night before the procedure. The next morning, she got a phone call from her mother’s assistant telling her that Joan stopped breathing and they were on the way to the hospital. Joan said she picked up her son and got a plane to New York.

While they were flying, she learned that Joan was put in a medically induced coma. In New York, she learned her mother had a major brain injury and it was a wait-and-see situation.

She said although she was hopeful, she slowly realized her mother wasn’t coming back from the brain injury.

Melissa Rivers’s new book is called The Book of Joan, but she originally wanted to call it Cheaper Than Therapy.

Melissa read the part of the book that discussed the day they took her off life support. Melissa said Joan was surrounded by the people she loved the most. Melissa said her mother didn’t have to tell her that she loved her, because she knew.

Joan Rivers said on Dr. Oz on her last appearance that she always tells the anesthesiologist to be careful, because she’s the only one her daughter Melissa has. Dr. Oz said this was almost like a premonition.

Melissa said that Joan was terrified of anesthesia and that she always tried to make surgery as safe as possible. But this procedure was very routine.

Melissa Rivers said a few weeks after this happened, she got very angry because this didn’t need to happen. She’s now suing the outpatient facility where Joan Rivers was treated.

Melissa said that the reason she’s suing is because she wants to find out what actually happened to her mother.

Dr. Oz continued to talk to Melissa Rivers later in the show.