Dr. Oz has been talking to Melissa Rivers about her book The Book of Joan, which is about how she’s coping with the death of her mother, comedy legend Joan Rivers.

At Joan Rivers’s memorial service, stars ranging from Hugh Jackman, Howard Stern, and Whoopi Goldberg all came by. Melissa said that it meant a lot to have all those stars coming to celebrate her life.

Melissa said she was shocked to see all the people on the street and the police blockades and really touched by it. 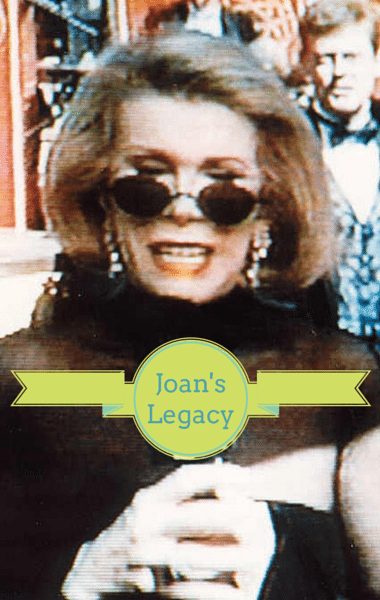 Dr. Oz talked to Melissa Rivers about what her mother, comedy legend Joan Rivers, was like at home and how she dealt with the suicide of her father. (alan-light / flickr)

The dedication to her book is: “For my mother, who I think about every day, and for my father, who as of this past September, is no longer resting in peace.”

She said her mother was still mad at her father for committing suicide, so she probably let him have it on the other side.

Dr. Oz and Melissa Rivers relocated to her kitchen. Melissa said her mother never cooked, but she would complain every time she went to Melissa’s kitchen because everything was healthy.

Melissa Rivers said her mother and her son Cooper were often partners in crime and worked against Melissa all the time.

Dr. Oz remembered asking Joan Rivers where she’d be without plastic surgery and she joked she’d be “out of work.”

Joan Rivers was not honored during the In Memoriam segment at the Oscars and Melissa said she “saw that coming.” She said Joan was never invited to anything. She said everyone in Hollywood is so serious and they don’t like it when someone holds up a mirror to them. She also said her mom was more like the kid looking in at the window of Hollywood rather than being inside of it.

Melissa Rivers said it’s been hard because they lost two colleagues on Fashion Police, in addition of course to Joan Rivers. But Melissa said they’re coming back. She also said in retrospect, they rushed back. She said the cast really loved each other, but when Joan died, it tore the family of the show apart.

Melissa Rivers said her mother Joan was terrified of going to events, because she didn’t think anyone liked her. But Melissa said that her mother was also very brave, because she would talk about taboo topics all the time.

She also said that Joan Rivers did a very early fundraiser for AIDS research, which at the time was called “gay cancer.” Joan Rivers received death threats for her efforts there.

Melissa Rivers said that in spite of everything, she and her son Cooper will be okay. Then an alarm went off in the background, apparently signifying that it was time for her meds, which she pointed out was funny timing.