Oscar winner Mo’Nique came by Dr. Oz to talk about losing 100 pounds and the recent Hollywood controversy. Mo’Nique said it took a lot of hard work for her to lose 100 pounds. She said it wasn’t a pill or a shake that helped her lose the weight. It was her determination.

It took five years, but she was able to do it. She started walking and really getting serious about her life. She said on her walks, she wondered how she allowed herself to get to where she was. She also wondered how far she wanted to go in life. It was the answers to those questions which drove her. She called those conversations “her church.” She said when she stops working out, her body complains and wonders why she’s not exercising. 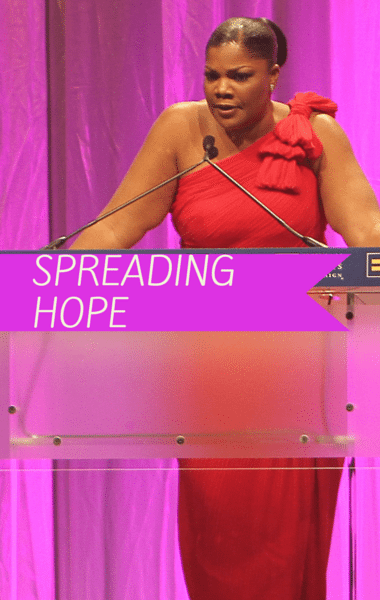 Mo’Nique came by Dr. Oz to talk about her incredible 100-pound weight loss, whether she’d been blacklisted in Hollywood, and her new movie ‘Blackbird.’ (bootbearwdc / flickr)

She works with a personal trainer daily, working out 60 minutes every day. Dr. Oz showed some footage of Mo’Nique dancing.

Mo’Nique said the beginning of her journey started after taking a shower with her husband. Her husband asked her how much she weighed. Mo’Nique knew the answer was 300, but she couldn’t say it, so she lied and said 266 pounds. Her husband said that was too much and he wanted to have her around for a lifetime.

After this conversation, she cried in her closet because she was ashamed. But when she came out, she hugged her husband and told him she wanted him for a lifetime, too.

Mo’Nique said she was an emotional eater and she had a strong relationship with food. She also said she appreciated the fight Dr. Oz is making to label GMO food. She wanted to know what she’s putting inside of her body.

She said she tries to only eat things she can pronounce. She said her body won’t recognize it if she can’t, either. But she said sometimes she violates this rule for chicken wings.

Mo’Nique said it’s important to do this one day at a time. She said a lot of people set unrealistic goals like, “In 90 days, I’m going to lose 50 pounds.” She said that’s dangerous for the body and it’s not healthy. Instead, treat it like a marathon, not a sprint. Just drink one extra bottle of water, take a half piece of cake, or don’t go reaching for that second helping of fried chicken.

Remember that your health is for the rest of your life, not just for a moment.

Dr. Oz asked Mo’Nique about the claim that some people have that she’s been “blacklisted” in Hollywood. Mo’Nique said she’s been misrepresented in this area.

“I’ve never bought into being blackballed or blacklisted. That was someone’s perception,” Mo’Nique said.

She compared it to the recent letter signed by 10 doctors calling for Dr. Oz’s resignation from Columbia University Medical School. She said that was based on their perception of him, not the facts.

She said the scripts and offers that were coming to her didn’t make sense for her to take. So when Lee Daniels said she’d been blackballed, people married that idea with the fact they hadn’t seen her in a while.

But Mo’Nique is starring in the new movie Blackbird. Mo’Nique said the message of this movie is acceptance and that God is love.

She said it’s a movie about a young man in the Deep South trying to deal with the fact that he was born gay. His mother, played by Mo’Nique, believes strongly in her religion and what she hears from the pulpit. She finds it difficult to accept her son when he comes out to her.

She said the young star, Julian Walker, is “fearless” and “brave” in the role. She said he gave the role everything. She said many young actors worried this role might ruin their career or result in them being typecast as gay in future roles. Mo’Nique said that Julian Walker, however, wanted to “save the life of one young man or one young girl” with the work he does in this role.

Blackbird is in theaters now.