Dr. Oz talked to two women who you’d never suspect would have become heroin addicts. Cynthia was a mother, grandmother, and a member of the PTA. At 42, after seven C-sections, Cynthia developed scar tissue that caused her pain in her hip. It got so bad that she went to the doctor to get pain pills. She was able to get a prescription for Oxycontin, Oxycodone, Soma, Flexeril, and Valium. Cynthia really liked these. She started to be unable to function without them. She was up to 6 80-milligram Oxycontin a day within six months. Cynthia’s doctor left town, so Cynthia went to a different doctor. The new doctor started cutting her prescriptions down because that amount was dangerous. But Cynthia’s addiction was in full bloom by then. 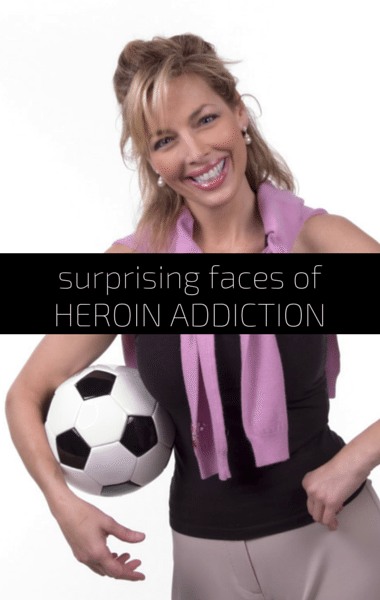 Dr. Oz talked to Cynthia, a PTA mom, and Stephanie, an honor student, who both ended up heroin addicts. How did this happen and how can we prevent it? (Tad Denson / Shutterstock.com)

Cynthia was using up her pain medication in one week, instead of one month. To get through the other three weeks, she started buying heroin. She learned how to smoke it and did it in her garage. “I was in heaven. It was a euphoric feeling,” she said.

Cynthia learned she could sell one of her 80 milligram Oxycontin for three days worth of heroin. “I had always tried to be the perfect mom. And I realized I was nothing but a heroin addict,” she said.

Stephanie grew up in a loving family and got good grades in high school. She was an all-conference softball star. She came down with a stomach virus in college that changed her life. Stephanie went to the hospital for the virus and when she was discharged, they gave her 5 milligram Percocet. She liked the way they made her feel.

Later, she was introduced to a friend who sold her 30 milligram percocets, six times more powerful than the drugs she was originally prescribed. She crushed them up and snorted them. Stephanie had gotten so bad in her addiction, she started to steal from her parents and every job she ever had. Finally, she turned to heroin and began using it every day.

“Here I was the all-American child. I grew up in a great home. I wound up a heroin addict,” she said.

Dr. Oz: Turning Away from Addiction

Dr. Oz talked to addiction specialist Seth Jaffe, who said he was glad Cynthia and Stephanie were telling their stories to make people more aware of addiction. He said this country has a lot of heavily addictive pain medication and we need an intervention because these pain meds are gateway drugs to heroin.

He explained that this is how seemingly upstanding citizens turn to street drugs. In Cynthia’s case, an irresponsible doctor prescribed her a series of highly addictive medications meant for people in terminal pain and then another irresponsible doctor cut her off. Her body was too addicted to stop by then.

Cynthia said that even three years later, when she got a phone call from her old heroin dealer, she almost caved and bought from him. But she daily works with a 12 step recovery program and she credited that with giving her the strength not to cave.

Heroin-related deaths are up nearly 40 percent in this country. Dr. Oz talked to Becky, who is Stephanie’s mom. Becky said Stephanie’s addiction was like a tornado. She felt like she and her husband could do nothing to help Stephanie. Now, Stephanie’s been clean for two years. When Stephanie was in the throes of her addiction, they had no idea who to turn to. But now Becky knows it takes a long time to overcome an addiction like that. Stephanie said she was thankful for their forgiveness and understanding. Becky described it as a “sick person trying to get well” rather than a “bad person trying to get good.”

Dorothy was also in the audience. She lost her only child to a heroin overdose. She said she wanted people to know that one in three families are affected by addiction. She said the heroin and pill epidemic is bigger than we think and she wants people to know that. As she started to cry, Dr. Oz gave her a hug and told her he was sorry she had to go through that.

Dr. Oz asked that people have only one doctor prescribe pain medication. If you’re prescribed an opiate, take it for 1 week and then ask for something less strong. If you have extra, flush them down the toilet.

Cynthia warned that if people are starting down the road to addiction, she wanted them to know that’s a lonely and dangerous path. For her, she said she knew she could never cure the disease of addiction, just keep it in remission.