TV legend Regis Philbin came by Dr. Oz. He holds the record for more time on television than any other person, with almost 17,000 hours. But even after all those hours, Regis still had some health lessons he wanted to share.

Regis Philbin said exercise has helped him a lot over the years, as well as his wife Joy. 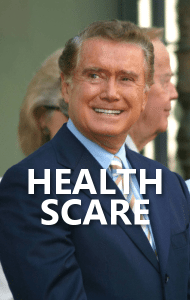 Regis Philbin came by Dr. Oz to talk about his incredible career in broadcasting, retiring from his show, and his acid reflux. (Joe Seer / Shutterstock.com)

It’s been three years since Regis Philbin stepped down from his show after a 60-year career in broadcasting. Regis said he misses it from time to time, but spending 28 years on television was a lot for him. Getting up every morning and doing the same opening got tiresome after a while. But he does miss it.

Regis Philbin said that lately, when he lays down, he senses a little fire developing in his chest.

“When I say fire, I mean it’s painful,” Regis said.

“Dr. Oz is having fun. I’m telling Dr. Oz about something that really bothers me and you’re having laughs,” Regis said.

Regis said he’s been trying to do something every night to get over the pain. He’s been taking Alka Seltzer. Dr. Oz said he should put some blocks under his headboard to raise up his bed. This will help the acid in his stomach from slipping into his esophagus.

Regis said some nights he can’t fall asleep. He seemed shocked when Dr. Oz said he never has any trouble getting into sleep. Dr. Oz said the bedroom should be reserved for just sleeping and being intimate. If Regis reserved the bedroom for these two purposes, he’d fall asleep more easily.

Regis Philbin has been married to his wife Joy for 44 years. Regis said that Joy won the battle a long time ago and he just listens to her and admires her. “Thank you, Joy, for my life,” he said.

Regis Philbin also talked to Dr. Oz about his heart issues later in the show.