Dr. Oz kicked off his show by talking to Robin Roberts about her health. Robin Roberts was famously and tragically diagnosed with breast cancer. After being treated for the disease and surviving it, she had another devastating diagnosis: MDS, a complication of the chemotherapy she received for the breast cancer. To combat her MDS, she needed a bone marrow transplant. Her sister, Sally-Ann, was a perfect match. Robin got the transplant and survived the MDS, too. 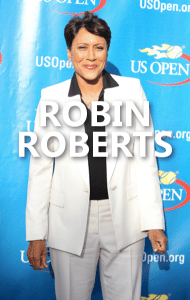 Robin Roberts came by Dr. Oz to talk about her health struggles, how she stays positive in the face of serious illnesses, and her new special ‘Thank You America.’ (Debby Wong / Shutterstock.com)

Robin Roberts said she wants people to keep fighting, no matter what they’re facing. Robin Roberts said her test results show that there is no detectable cancer in her system. She has her blood work drawn every six weeks or so and the last one was perfect. She said she’s grateful that she’s healthy now.

Robin Roberts said she wasn’t doing anything wrong with her health when she got cancer. No drinking or smoking. Dr. Oz wondered if Robin Roberts had any regrets about getting the chemotherapy for the breast cancer, since it gave her MDS. She said not at all. You have to fight the battle in front of you and her cancer was very aggressive. She also said her oncologist told her she was one of three patients out of thousands she’d had who ever got this condition from that treatment.

Robin Roberts said she was grateful she had so many siblings. Siblings aren’t automatic matches for bone marrow. They’re only matches about 30 percent of the time. Robin joked to her mom when her siblings were getting tested and said, “Does dad have any more kids out there?”

But her sister Sally-Ann was a perfect match, even though her other two sisters were not. Robin Roberts said Sally-Ann is definitely in her will now.

Robin Roberts said it’s important to change the way you think in order to change the way you feel. It’s key to remain positive and look for the joy in life to improve your health. Her mom would always say, “Make your mess you message.” Robin said this means you have to learn from what you’re facing and what you can teach others from that lesson.

Robin’s message is that you just have to keep going. All your troubles will pass eventually. She also said she’s very grateful to her supporters and her doctors.

Robin Roberts has a special on Thanksgiving night 2014, about showing gratitude to important unsung heroes across the nation called Thank You America. You can watch it on ABC November 27.

Because Dr. Oz believed Robin Roberts was one of those unsung heroes, he prepared a video message from several women going through health struggles. They talked about how Robin Roberts inspired them. One woman had Stage 4 breast cancer, another had a messy divorce, another lost her father when she was 9 weeks pregnant, and still another said Robin Roberts inspired her to stop having pity parties. All four women thanked her and one even called her “superwoman.”

Robin Roberts said this was the greatest gift Dr. Oz could’ve given her. Dr. Oz said there were so many women who wanted to be a part of that video that Dr. Oz couldn’t hold them back. So all of the women came out from backstage. They all raced forward and gave her a big hug.