Dr. Oz talked to a couple on the show with a problem that’s probably happening all across America. Daija, the wife, can’t stop snoring at night, which is causing her husband Paul to stay up at night and drink all kinds of energy drinks and caffeine to stay awake during the day. 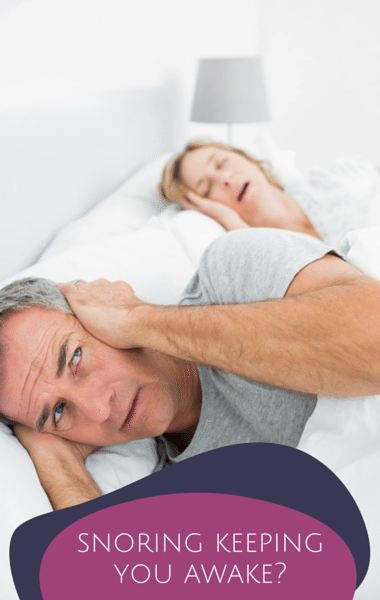 Dr. Oz talked to a couple with a problem many couples face. The wife snores all night long and the husband is kept up late at night because of it. Can Dr. Oz help them? (wavebreakmedia / Shutterstock.com)

Paul said that Daija’s snoring started about two years ago. He described it as a deep growl. Daija goes to bed before Paul, so when he goes to bed, she’s already snoring. He’ll cover his ears with pillows, but it doesn’t work. He wakes up several times throughout the night.

Paul said that even though Daija has offered to sleep on the couch, he wants her to sleep next to him because he can’t sleep without her there. It’s a catch-22 though, because he’s also having trouble sleeping with her there.

Dr. Oz: What is Sleep Apnea?

Daija said when she wakes up, she feels like her head is stuffy and huge. She has sneezing fits in the morning. Paul said he suffers from asthma, so he worries about Daija’s snoring, because it sounds like she’s having trouble breathing.

Dr. Oz explained that sleep apnea is when you start to suffocate while you’re snoring. You’ll have periods of time when you won’t be able to breathe for about 10 seconds and that’s what can wake people up.

They sent Daija home with a device to track her sleep. It turned out she doesn’t have sleep apnea. Dr. Oz played some audio of Daija snoring and it sounded like a grizzly bear.

Paul wore a device at night, too. It turned out that his sleep dramatically decreased the more Daija snored. Paul had three times throughout the night when he woke up. Paul said with the interruptions, he thought he got maybe six hours of sleep. It turned out he got four hours and 28 minutes of sleep. That’s why he’s using all these energy drinks.

Lack of sleep can cause high blood pressure, diabetes, and obesity. Luckily for Daija and Paul, Dr. Oz had some plans for them to cure her snoring and help him sleep next to her.