By now, you’ve probably heard about the letter written by 10 doctors and sent to Columbia University Medical School, where Dr. Oz has been on the faculty for 20 years, calling for his removal. Dr. Oz addressed his critics head-on in this show.

Why Are These Doctors Attacking Dr. Oz? 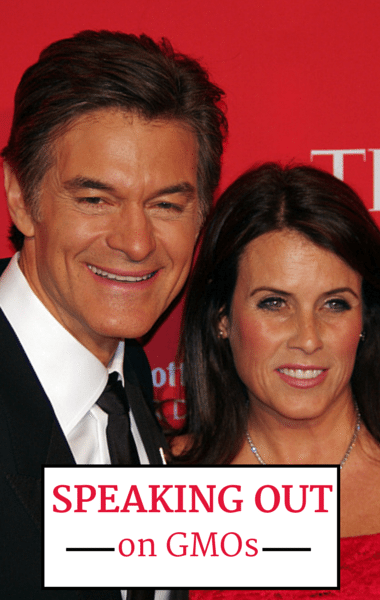 Dr. Oz addressed his critics on his show. The heart of the recent controversy seems to be his story about the Arctic Apple, a GMO apple that doesn’t turn brown. (shankbone / flickr)

After explaining who some of the doctors were that wrote the letter, Dr. Oz also talked to Dr. Joel Fuhrman in his studio, who said this situation is very ugly. He said the doctors who wrote this aren’t just attacking Dr. Oz, they’re attacking “all physicians, all health professionals, all people who maybe don’t take a stand on party line,” he said.

Dr. Fuhrman said doctors do what they do based on logic, experience, and good judgment. He said that doctors don’t have to support the “most favored industry group of the day.” He called what these doctors did “anti-American,” “anti-freedom,” and against “the right to help people in the best way possible.”

Dr. Fuhrman said the way the media has covered this was “sloppy and even dangerous journalism,” because they reported a lot of inaccurate information and didn’t do background checks on the doctors. “They attacked first, asked questions later,” he said.

Should Dr. Oz Be Looking at Alternative Practices on His Show?

Dr. Oz asked Dr. Fuhrman about the criticism of Dr. Oz’s decision to look at alternative practices from around the world. Dr. Fuhrman said he learned in medical school that “all drugs are toxic.” They all have serious potential side effects. He said it’s important to use natural, lifestyle, and nutritional practices first to get to the cause.

Dr. Oz also noted that he’s been pressed hard on broader health issues, like the environment. The media has given a lot of push back on those stances. Dr. Fuhrman said that whenever you take a stance, someone will push back.

He also noted that governmental and health organizations and medical studies are all influenced by industry studies and the interests of pharmaceutical lobby groups. So when someone tries an approach to get people well by lessening their reliance on drugs, there is a lot of opposition.

Is Dr. Oz Against the Arctic Apple and GMOs?

Dr. Oz said that another question people might ask is why did this happen now? He said that many in the media speculate it has to do with his testimony in front of the Senate about his past support of certain weight loss supplements. But he said they stopped mentioning any of these products a year ago.

Dr. Oz said there’s a clue in the letter, where the writers criticize his call to action that all GMO foods should be labeled. Specifically, they refer to a show he taped recently about the genetically modified apple called the Arctic Apple, which is modified so it does not include the enzyme that causes the apple to brown when it is cut. In this way, the apple will stay white and fresh-looking while you eat it and not turn brown in your hand In the segment, he talked about the potential dangers he saw of the apple and he even talked to Neal Carter, the president of Okanagan Specialty Fruits, the company that makes the Arctic Apple, about his concerns.

Dr. Oz reached out to Okanagan Specialty Fruits for a statement on how they felt about how his show represented their company and product. They said in part:

Dr. Oz also noted, “I respect what the scientists at Arctic Apple have created. I told them so. I said it on the show. I appreciate our honest discussion. That’s what’s supposed to happen. Public shaming and bullying me is not how it should be done. Now, this month we celebrate my 1,000th show. And I know I’ve irritated some potential allies in our quest to make America healthy. No matter our disagreements, freedom of speech is the most fundamental right we have as Americans. And these 10 doctors are trying to silence that right. So I vow to you right here, right now: we will not be silenced. We will not give in.”

To prove the point, Dr. Oz talked more about GMOs in a later segment of this episode.