You may have seen the headlines attacking Dr. Oz this past week after a letter from 10 doctors was sent to Columbia University Medical School calling for Dr. Oz’s removal after 20 years as a faculty member. The story was picked up by many news organizations. In this episode of Dr. Oz, he addressed his critics head-on.

“I was surprised, since my life’s work has been built around one simple message: you have a right and a responsibility to become a world expert on your own body and the way you do that is by having access to the best, most current information, multiple points of view, and diverse opinions. That’s the best way you can make an informed decision about you and your family’s health,” Dr. Oz said. 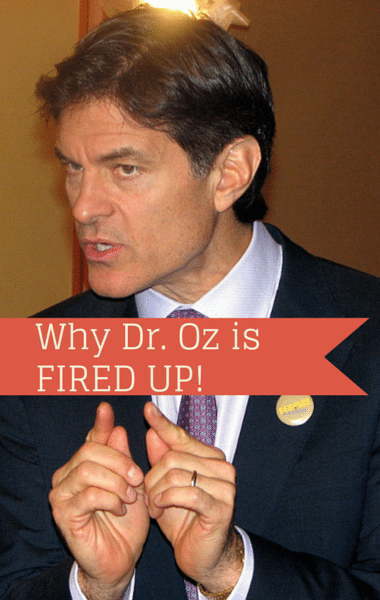 Dr. Oz acknowledged that there has been a backlash in the way he’s approached that mission on his show in the medical community. Dr. Oz said he’s always believed doctors should never fight their battles in public. But now he said he felt like he had to.

He said many news outlets reported that his own hospital’s doctors were “out to get him.” But Dr. Oz said this isn’t true.

“These doctors are criticizing me for promoting treatments and cures in the interest of personal financial gain, something I tell you everyday on this program I never do,” Dr. Oz said.

Is Dr. Oz Against GMOs?

He also said that while they claim he has a “baseless and relentless opposition to the genetic engineering of food crops.” Dr. Oz said this isn’t true because he’s never judged GMO foods. He does support GMO labeling, just like 64 countries throughout the world.

Dr. Oz said these doctors also called him a “quack.” Dr. Oz quoted who he said were his “harshest critics,” the authors of a recent British Medical Journal paper, who acknowledged that they are “disappointed that the overwhelming commentary seems to be that our study somehow proves that Dr. Oz or The Doctors are quacks or charlatans or worse. Our data in no way supports these conclusions.”

Who Sent the Letter Calling for Dr. Oz’s Removal?

Dr. Oz asked investigative reporter Elisabeth Leamy to find out who these doctors are.

Elisabeth Leamy said several of these doctors calling for Dr. Oz’s removal from Columbia University Medical School have ties to big industry. Dr. Henry Miller, whose name is at the top of the letter, may look impressive on paper. But Elisabeth Leamy said that he also strongly supports genetically modified foods, or GMOs.

Dr. Miller was the face and voice of No on Prop 37, the California campaign that lobbied consumers to vote against labeling GMOs. Dr. Oz has always said he’s for labeling GMOs.

Dr. Miller was also under fire for taping an anti-Prop 37 ad on the Stanford University campus. The ad identified him as being with Stanford, but he’s actually with a conservative think tank called the Hoover Institution, which is located at Stanford University. The university demanded he pulled the ad.

In the 1990s, Dr. Miller was a key supporter of the tobacco industry. He helped write the guiding scientific principles of a group established to fight smoking restrictions.

Lisa Graves, the executive director of sourcewatch.com, a site that tracks corporate front groups and talking heads affiliated with them, said, “In our view, Dr. Henry Miller is a schill for corporations.”

What is the American Council on Science and Health?

Dr. Miller is affiliated with an organization called the American Council on Science and Health. Elisabeth Leamy tried to talk to that group at their headquarters, but no one was there. ACSH has spoken in support of cigarettes, pesticides, GMOs, and more. They also took money from the tobacco industry, pesticide makers, and firms behind GMOs, according to internal documents leaked to The Mother Jones Magazine.

Gary  Ruskin, executive director of U.S. Right to Know, also talked to Elisabeth Leamy. About ACSH, he said, “They’re rent-scientists and they’re famous for being rent-a-scientists and this is really well established.”

Dr. Gilbert Ross is the ACSH president and he also signed the letter against Dr. Oz. According to Elisabeth Leamy, he’s also a convicted felon. While working as a doctor, Dr. Ross was charged in a Medicaid fraud scheme that cost the state of New York $8 million. He was sentenced to nearly four years and served time in federal prison.

“The judge said Ross was a ‘highly untrustworthy individual.’ Those were his exact words,” Lisa Graves said.

“I think this is definitely a smear campaign against Dr. Oz and I think it’s a campaign that’s driven by individuals who are connected to big industries,” Lisa Graves said.

Dr. Scott Atlas works with Dr. Miller at the Hoover Institution and Hoover has taken money from companies that produce GMOs.

“Those are just some of the doctors behind the letter calling Dr. Oz’s character and his agenda into question. Who should you believe? You be the judge,” Elisabeth Leamy said in the pretaped video segment.

Dr. Oz continued talking about his critics and GMOs in a later segment.