Dr Oz showed shocking videos of e-cigarettes unexpectedly exploding in people’s pockets, purses, and even their mouths. E-cigarettes are often marketed as a safer alternative to regular cigarettes because they use vapor instead of smoke. E-cigarettes is a $3.7 billion industry and only getting bigger, but more than 200 e-cigarettes have reportedly exploded, causing injuries and burns.

E-cigarettes may produce carcinogens, including formaldehyde. They are made up of several parts, including a liquid nitrogen cartridge, an atomizer, and a lithium battery. The liquid inside is heated to about 600 degrees to turn the liquid into a vapor. When the battery is made poorly, it can short out and cause the liquid and the e-cigarette to explode. 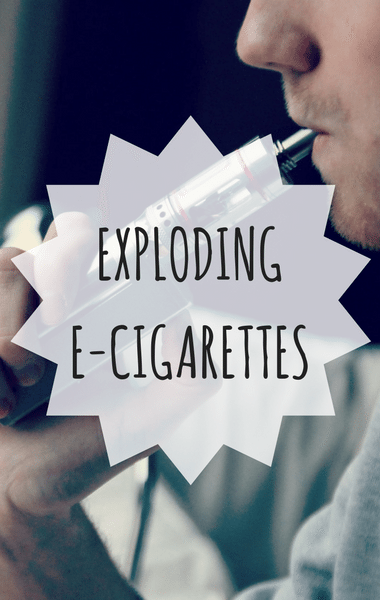 With e-cigarettes now more popular than ever, Dr Oz revealed shocking footage of exploding devices. Are they really as safe as we once thought? (vaping360 / Flickr)

According to Dr Jennifer Caudle, a family physician, the U.S. Fire Administrator reports that about 80% of e-cigarette explosions happen when the device is charging. Dr Caudle had noticed several components that those exploding devices seemed to have in common. For one, an incorrect or non-approved charger being used or over-charging of the device. Also, if a non-approved battery or other part of the e-cigarette is being used, that can also put the device at risk for an explosion. The truth is that too many devices “simply are not made well,” according to Dr Caudle.

Dr Caudle revealed pictures of burn victims to prove just how dangerous the explosions can be. In one case, a woman had second-degree burns around her mouth and had a tooth blown out of her mouth. Dr Oz then welcomed Mara, a woman who was shopping at the mall when her e-cigarette exploded inside her purse while at the check-out counter. Mara explained that even the security camera footage didn’t do the video justice because the bag exploded, she was covered head to foot in soot, inhaled lithium, and was coughing and unable to see.

Once Mara realized what happened, she was angry because she had never been informed about the possibility of an explosion. Dr Oz showed the actual purse to prove just how damaging the e-cigarette was, acknowledging that the incident as a whole was certainly scary, but could’ve been a lot worse if the circumstances were different.

Dr Oz then welcomed a lawyer who represented more than 80 other e-cigarette explosion victims. A $1.9 million verdict was just handed out in one of his cases. Attorney Greg Bentley explained that even then, it doesn’t seem to be enough of a wake-up call for e-cigarette companies, because explosions are only becoming more common. The problem is that most of the defective products are manufactured in China and it’s “next to impossible to get jurisdiction against the Chinese manufacturer,” which means they can essentially make their products without any legal liability for the harm that it causes.

Bentley explained that everyone in the supply chain who parts a product on the market that is defective, no matter where on the chain they are, they’re going to be responsible for the harm. That’s all the more reason for retail stores to be diligent in making sure the e-cigarettes and batteries they’re selling are safe. It also doesn’t help that e-cigarettes aren’t regulated, and now tobacco companies are fighting regulation making the problem worse.

Dr Caudle explained that in the summer of 2016 the FDA stepped in with the idea that new devices would need to be evaluated for their ingredients, health risks, and product design. But for devices already on the market, they would have two years to submit a product registration to be evaluated for those issues.

Dr Caudle went undercover to find out if consumers were getting correct information. She visited several locations where e-cigarettes are sold. It wasn’t until her last visit that she was given any information about the explosions. The first two retailers downplayed the risks.

Dr Caudle also showed Dr Oz how little instruction is given to consumers when they purchase an e-cigarette, given how complicated and dangerous the products are. Greg Bently agreed that retailers and manufacturers were failing to give proper warning or any warning at all. Dr Oz suggested that if you are going to use an e-cigarette, make sure you use the correct charger, don’t overcharge the battery, don’t carry extra batteries in your pocket, and avoid keeping the device next to metal like your  keys, jewelry, or coins.

You can also encourage lawmakers and the FDA to properly label e-cigarettes to reflect the risks and potential dangers.