Pesticide poisoning is real and terrifying, and Dr Oz was introduced to Liz, who was at work in her office in Atlanta, when she was “innocently exposed” to pesticides. At that moment, her health and life was forever changed. Liz and her husband Todd joined the show, and Liz explained that she was at work 16-years-ago when an exterminator came in and sprayed pesticides around her desk. Within two minutes of him leaving she began having trouble breathing, and her mouth, nose, eyes, and lungs began burning. She started wheezing and symptoms progressed until her eyes and nose began watering and she broke out into a rash. Her co-worker took her outside thinking it would get better but it didn’t, so she was rushed to the hospital.

Todd rushed to the hospital to be by her side and they later found out that Liz had reactive airways disfunction syndrome and vocal cord disfunction. The only treatment for RADS is steroids, which she has taken for 16 years. She’s had numerous hospital visits and they’ve traveled to several different states to see specialists, but the only treatment is the steroids and they keep her alive. Liz had zero health issues before that day. 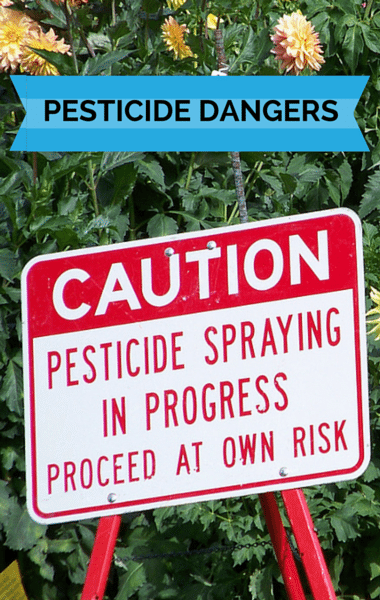 Dr Oz talked about the shocking dangers of pesticide and how you can protect your family. (jz909 / Flickr)

Dr Oz: What Happens When You Inhale Pesticides

Dr Oz explained that when you inhale pesticides, they can irritate your airways, which is what caused the burning Liz described. The particles can then go through the vocal cords and enter the lungs, scarring the lungs, causing chest pain and other asthma-like symptoms. Liz was told she’s as well as she’s going to get, but she wakes up with an inhaler and takes 32 pills, not including her steroids. She’s also on oxygen and has to take nebulizer treatments, none of which she had to do before.

Todd said they don’t want it to happen to anyone else and that’s why they came to the show.

Dr Oz then turned to Elisabeth Leamy who reported two shocking news headlines of families who were accidentally exposed to toxic chemicals, with tragic results. After the McCoy’s house was fumigated for termites, they were told it was safe to return. They woke up the next morning feeling sick and rushed to urgent care, but it was too late for their son who suffered severe brain damage from which he may never recover. A state investigation found that Payton’s condition was the result of exposure to the pesticide Sulfuryl Fluoride.

While vacationing in the Virgin Islands, Steve and Theresa Esmond and their two teenage sons began having seizures and became gravely ill after exposure to pesticides used to fumigate the condo below their’s. The family’s recovery from devastating neurological damage has been slow. Steve suffers severe tremors and can barely speak, while the two boys are still in the hospital and can barely move. The cause: exposure to Methyl Bromide, which isn’t authorized for residential use.

Elisabeth Leamy then joined the show saying ask the pesticide company what chemicals they’re planning to use in your home, because every pesticide has a material data safety sheet that you can read online. You want to use the mildest chemical that will do the job, because bugs can cause health problems too. Treat your home as little as possible to get the job done. Also see if it’s possible to spray the outside barrier of your home to keep the pesticide outdoors and see if you can use more pest traps and less spraying.

For any normal pesticide used day-to-day, you shouldn’t come back until the pesticide is dry and air out your home when you get home. For serious pesticides like the ones used for termites, you want to be out of the home for several days. Remove your pets from the home as well and remove any of their items as well. Also try to remember to remove your shoes before you walk around inside and of course, always wash your hands.

Dr Oz: Keep Pesticides Out Of Your Home

To keep pesticides out of your house, you want to keep up with spills and crumbs on a daily basis. Good deep-cleaning is important, so try to remember to clean underneath the fridge, under the dishwasher, and under any appliances or food sources. Use airtight containers for foods like cereal to avoid bug problems. Cockroaches actually love cardboard so you want to package up the boxes properly to not expose the inside of the boxes.

You can also use natural pesticides, because cockroaches hate catnip! Ants have an version to cucumbers and flies hate the smell of mint.