Legendary comedian Joan Rivers stopped breathing during a procedure in August 2014. Dr Oz shared an update about the investigation into her death, with some help from CNN’s Susan Candiotti.

CNN’s report found that an unauthorized biopsy on Rivers’ vocal cords began while she was sedated for another procedure. An ethicist told CNN that this is a red flag. A source inside the clinic reported that Rivers was undergoing an endoscopy by Dr Lawrence Cohen.

Cohen spotted something during that procedure, and Rivers’ personal ENT specialist began a biopsy. CNN’s source said that the ENT doctor was not certified to operate at this clinic. Further details include a statement from Yorkville Endoscopy claiming that a vocal cord biopsy has never been performed there. 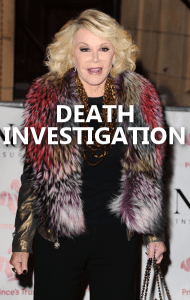 Dr Oz shared a CNN report about the Joan Rivers death investigation and spoke with experts about what went wrong with her clinical procedures that day. (Featureflash / Shutterstock.com)

However, CNN’s source disputes that claim, adding that her vocal cords began to swell during the biopsy attempt, which may have caused her to have trouble breathing. This could have cut off oxygen to the brain, which can be particularly dangerous for older adults.

The clinic called 911 at 9:40 a.m., and NY Fire Rescue arrived five minutes later. Help seems to have arrived quickly, with 10 emergency personnel on the scene within 10 minutes. New York’s medical examiner and the state health department are continuing their investigations.

Meanwhile, Yorkville Endoscopy says that Dr Cohen is not currently performing procedures or serving as medical director at the clinic. So far, no one is being accused of wrongdoing.

Dr Koufman has written a book on reflux, and she said that if it was suspected that Rivers had reflux, she never should have been at this clinic for such a procedure.

Dr Roizen, an anesthesiologist, explained that sedation and anesthesia are different things. However, an examination of the vocal cords is not advisable under sedation, but rather general anesthesia.

In a clip from Rivers’ final appearance on Dr Oz, she spoke about her fears regarding operations and anesthesia. Looking back on those comments, Dr Oz called them heartbreaking.

He used an animation to illustrate what may have happened during Rivers’ Endoscopy procedure. The vocal cords should have been wide open to let her breathe. But according to the CNN report, the gastroenterologist asked the ENT to look at something he found.

The ENT, who was allegedly not authorized to operate in this clinic, attempted to perform an unauthorized biopsy without the patient’s consent, per CNN’s source. Dr Koufman said this should have been done in an operating room, in case any problems were to occur.

During the process, Rivers’ vocal cords swelled, impeding her ability to breathe. Dr Oz said that cardiac arrest can set in when your oxygen supply is cut off. Dr Koufman said that 80 million cases of Sedated Endoscopy occurred in 2013, with a reported death rate of 1 in 10,000.

“We would expect about 800 people to have death due to Endoscopy in a year,” she said.

Dr Oz asked Dr Roizen what an anesthesiologist could have done in this type of situation. Dr Michael Roizen said that this person would have to be prepared for the worst case scenario in advance.

“We would put a tube in past the lesion if she was going to biopsy that, so we would have breathing,” he said. You can also temporarily paralyze the vocal cords so they won’t spasm, and so a doctor could get a better look or biopsy.

Dr Roizen also said that we don’t know how long there were problems before the clinic called 911. There was also a rumor that a doctor took a selfie with Rivers while she was under, which Dr Koufman called unprofessional.

The experts agreed that this was an unauthorized procedure, and the wrong place to have it. Dr Koufman said there are other options, such as performing the operation while the patient is awake.