Are all the headlines about salad being overrated true? He sent author of “The Dorito Effect” Mark Schatzker, to visit the lettuce industry to find out what we really need to know about the popular greens. Critics argue it’s nothing more than a “vehicle for fattening dressing” and that lettuce is “nutritionally empty.” Mark explained that back in 70’s and 80’s, salad wasn’t too healthy because it was mainly a side dish of iceberg lettuce. But in the 90’s leafy greens became more popular and salad was transformed.

These days, not only are people eating healthier lettuce, but healthier lettuce is being grown as well. Ilya Raskin, a professor and planto biologist at Rutgers University, explained that they use non-GMO approaches to enhance the nutrition of lettuce. Ilya recently discovered a new “super lettuce” that has 2-3 times the antioxidants of blueberries. Dr Raskin’s lab created an artificial GI tract that showed the antioxidants in his lettuce can be absorbed by the human body. Mark gave it a taste and agreed that it tasted like great lettuce! 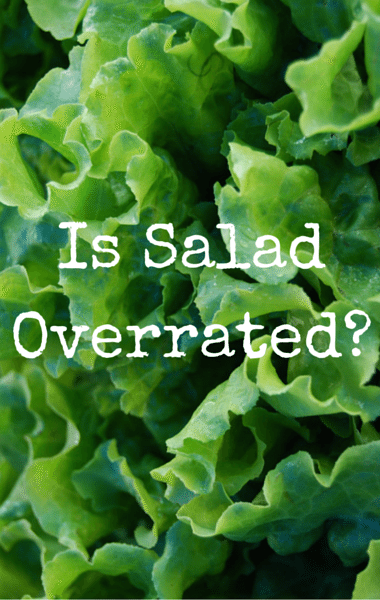 While critics argue that salad is just a diet trap, Dr Oz and Mark Schatzker set out to prove that salad is still worth eating, in the right way. (alicehenneman / Flickr)

Mark then visited with a New Jersey lettuce grower, Ken Vandevrede, who explained that in the field, a lot of water is used to grow lettuce. But in a controlled environment, only about 1/20 of the water used in the field, is used to grow the lettuce. As for the critics who argue that lettuce is too expensive, Ken disagreed because a head of butterhead lettuce sells for about $2, so when you add chicken and other vegetables, you have meal for two people that comes in at under $10.

“Haters gonna hate,” Mark said. “But I’m sticking with salad, and so should you.”

Mark then joined Dr Oz and explained that it all comes down to nutrient density, which is the amount of nutrients per calorie. When you look at lettuce on a per calorie basis, it’s “extraordinarily nutrient dense” which is why he suggested eating more of it. To eat 200 calories of romaine lettuce, you would need to eat 25 cups. To get 200 calories from an apple, you would have to eat two. The important thing is to use it as a vehicle for good things rather than unhealthy ingredients.

Mark then shared three ways to boost your salad to avoid unhealthy additions. He suggested using fresh herbs like cilantro, dill, and parsley, which add a ton of flavor and nutrients. You can add savory or sweet notes like pear and sunflower seeds. Mark is also big on olive oil, and explained that you should first taste it and look for a scratchiness at the back of your throat caused by an anti-inflammatory similar to aspirin. If you get that feeling, you know it’s a good olive oil. Add a squeeze of lemon and a pinch of salt to the olive oil and use it as dressing!